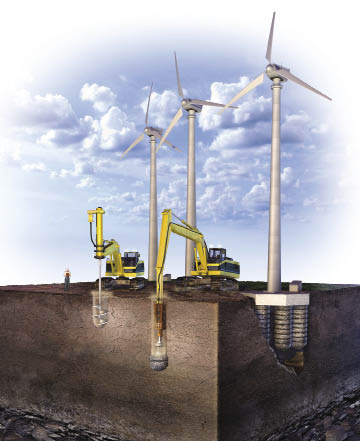 Supporting a wind turbine should be a simple task. But count on Mother Nature to throw a hard curve into a wind farm project. Take Puerto Rico’s Santa Isabel Wind Farm for example. Its basic plan consisted of 44, 2.3-MW turbines, but “problem soils challenged the project team,” says Alan Crumley, PE, Geotechnical Engineer, and Engineer of Record on the Santa Isabel project. Of the 44 turbine sites, 15 were candidates for ground improvement, meaning work that would make the turbine foundations more solid.

At the 15 problem locations, “variable soils consisted of soft clays with intervening layers of loose and saturated sand, to maximum depths of 35 to 37 feet,” says Crumley. To make matters worse, he adds, “Six of the 15 locations were also determined to be liquefiable.”

Deeper foundations were one consideration to support the weight. But after considering alternatives, the use of Geopier Foundations’ Rammed Aggregate Pier (RAP) elements, were selected as the most cost-effective, timely, and efficient alternative.

Geopier’s design of a combination of GP3 and Impact Systems met the needs imposed by the island’s variable soil conditions. For the soft clay soils, the Geopier GP3 system was used to remove the problem soil and replace it with dense rock, to provide support. The Impact system was chosen for the liquefiable sites, to make the ground viable for wind turbines by displacing the loose sand and densifying the ground while installing RAP elements. Cost-effective performance makes Impact a good application for soils subject to caving.

Despite supporting more than 1,000 MW in the U.S., Canada, and Europe, this project was the first use of Geopier’s soil firming techniques for wind power in Puerto Rico. WPE&D