Editor’s note: Wind farm owners, clients, and insurers in the U.S. may find interest in the European response and perspective to natural disasters events and insurance. 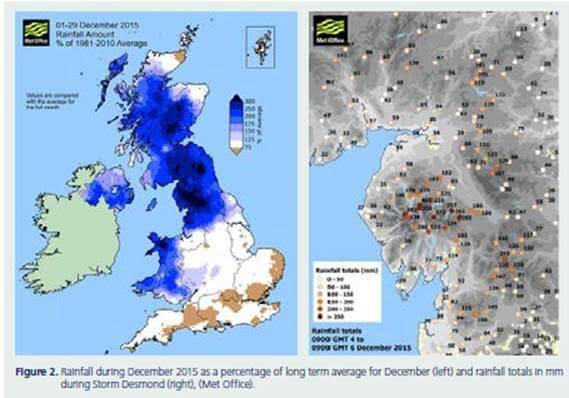 Rainfall during Dec 2015 as a percent of the long-term average for December (left) and rainfall totals in mm during Storm Desmond (right). Source: U.K. Met Office.

Zurich Insurance has released the latest in an ongoing series of PERC flood reports which reviews the complete risk management cycle surrounding storm ‘Desmond’ in the UK. In December 2015 the event caused severe flooding for homeowners and businesses across Cumbria and the north of England claiming at least three lives and flooding nearly 19,000 homes.

The report revolves around three key recommendations. The first is risk awareness and communication – citing the need for better communication of hazard, probabilities, risk and what actions to take when providing early warning services to communities.

The second centers around residual risk – when the first line of flood defenses, typically the large, constructed schemes protecting entire cities or areas, are either breached or over-topped, catastrophic loss must still be avoided.

Thirdly, is the need to learn about and to use better alternatives to sand bags. A range of alternative products are now available and are easier to deploy, more cost-effective and more reliable than sandbags.

In large scale events such as storm ‘Desmond’ there will always be a need to apply efficient risk management processes allowing communities and businesses to work with each other to maximize protection levels – especially when the resources available are limited. Indeed, while this report focuses on flooding following Storm Desmond, it must be noted that Desmond was quickly followed by two further storms, Eva and Frank, causing more damage and, in parts, overwhelming the capabilities of the population and the emergency services, that had just started the recovery phase from Desmond.

The report also calls for improving the language around the ‘100 year flood’ event to one that illustrates the level of risk and the consequences for individuals and communities. We need to acknowledge that the ‘100 year return period flood (or 1% annual chance) is by absolutely no means ‘low risk’.

The report advocates for better illustrating this, for example as follows: ‘Your new house has an expected lifetime of 50 years. If you live in a 50 year return period = 2% annual chance flood zone, this means there is a 64% chance you could experience this flood event in that 50 year span, and it will cause significant damage and loss to you and your house if it happens.  Such an illustration would show much better that a 1% annual chance of flooding in an expensive house is actually high risk compared to other perils (for example, fire or windstorm damage) – see page 45.

Conor Brennan, Head of General Insurance, Zurich UK comments: ‘A risk can rarely be reduced to zero so when an insurer’s involvement in a flood solution is put to the test in the ‘real world’ they will discover things that could have been done differently – sometimes even better. Given their recent increased frequency these extreme weather events force continuous improvement – hence the rationale for these analytical PERC reports.

‘At Zurich we recognize that it must be feasible within current legislation and practice, to forbid new development on flood plains. A financial incentive is surely needed to increase the uptake / motivation to reinstate in a more resilient way. This could be a tax incentive, an allowance, a coordinated approach by the insurance industry, or other instruments to alleviate the upfront cost of the investment.

‘That said, the immediate priority for an insurer is always to ensure that the communities and businesses affected understand and protect themselves as best as possible – pre-event risk reduction is key. Likewise we will always ensure they will get back on their feet as quickly and effectively as possible. Even the best defense can often be over-topped so we as a society must be aware of the protection level we are provided with. If we understand the threats associated with a potential loss and critically, we are ready and able to accept these consequences should an event exceed these protection standards the recovery can be that less painful.’

Filed Under: Insurance
Tagged With: the met office