Mechanical anemometers have worked well for years but the rigorous duty on wind turbines may call for a more reliable sensor. 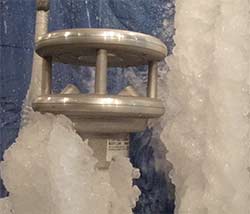 A Lufft Ventus ultrasonic wind speed and direction sensor, an example of devices that may replace cup anemometers, work well even in freezing weather.

Accurate measurements of wind speed and direction from reliable equipment are more important than ever in today’s competitive North American wind industry. Demand for reliable wind sensors is high and manufacturers are responding with more equipment choices than ever before. New technologies in high-tech sensors using ultrasonic signals to measure wind conditions are in wider use as traditional mechanical sensors used exclusively in the past are found to be unreliable in some cases. Following in the footsteps of the National Weather Service (NWS), a new generation of wind industry forecasters and production engineers are beginning to view ultrasonic technologies as a real option, not just an expensive alternative. As the industry matures, will reliability and maintenance-free operations turn the cheap and quickly installed met towers and mechanical sensors into relics of the past? Or is the low cost mechanical sensor here to stay?

Ultrasonic and mechanical sensors measure the wind in different ways. Mechanical sensors use moving parts and are connected to a datalogger or other data recording device. The “cups” for speed and “vane” for vectoral change measurement physically move with changes in the wind and give accurate readings of speed and direction. Ultrasonic sensors or “sonics” operate without moving parts. On a typical sonic anemometer, a transducer sends a pulse of ultrasonic sound from the ‘North’ facing side of the sensor. A microprocessor measures t time it takes to travel to the ‘South’ transducer. The wind speed is calculated from the time it takes the ultrasound to travel to the opposite transducer. Measurement times are affected by the wind speed and direction blowing along the line between the transducers. Without moving parts, measurement is immediate and precise.

When averaged over time, ultrasonic and mechanical measurement accuracies are comparable. Both report the level of accuracy according to sensor’s published specifications. Although data is accurate when averaged, mechanical sensors will not always reflect turbulence (rapid changes in wind speed and direction) and gusts due to the simple physical limitations of its moving parts. A mechanical sensor is affected by the start-up torque of the moving cup and vane. Observed differences occur in measured wind speed because of the time it takes a mechanical sensor to physically start up or register a change in wind direction. For example, if a storm blows through an area and the wind suddenly changes direction, the sensor must slow, stop, and restart with the change in wind direction. It will take some seconds to register and report the change.

In contrast, an ultrasonic sensor is not affected its inertia. It will measure a change in wind direction or a high gust immediately and in real time. It’s this inability to measure sudden changes that spurred the National Weather Service to initiate a widespread change to all its Automated Surface Observation Systems (ASOS) from mechanical to ultrasonic sensors. ASOS systems serve as the U.S. primary surface weather observation networks. The NWS initiated the weather sensor upgrade program in 2000 following a new requirement by the Federal Aviation Administration (FAA) stating that all sensors must be capable of measuring variable gusts at three second intervals. Mechanical sensors are not designed with this capability. Most can only measure rapid wind speed changes to five-second gusts.

Reliability was another stated reason the NWS decided to make the switch. “There were mechanical deficiencies in the old sensors. Freezing was always a problem. When the sensors froze, they became inoperable or inaccurate. This is a huge problem when directing aviation,” says Al Wissman, acting Operations Division Director of the NWS1. Although ultrasonic sensors are often heated, the ultrasonic pulse, a sound wave, is sufficient to occasionally prevent the formation of ice on sensor transducer heads, even with a non-heated sensor. System upgrades from mechanical to ultrasonic wind sensing equipment finished in 2005.

A network of 883 ASOS weather systems is installed throughout the U.S. Most are used for aviation services managed by the FAA, but the data is public and available for use by anyone for reference. Wind farm developers often use ASOS, along with other NWS data as reference when determining the feasibility of a project site. New site measurements from met towers are correlated with existing wind data from a geographical area and used to validate data. NWS data is used as a general reference because many wind developers currently use mechanical sensors to capture onsite wind data. Hence, there is an increasing problem of inconsistency when referencing the ASOS ultrasonic wind data for a region. When submitting a wind project for financial review, consistency of data is a primary point of consideration. The Lufft Ventus ultrasonic wind sensor in a polymer housing would be acceptable for met towers but the metal housing with a heater would be the choice for work atop turbine nacelles.

Until recently, ultrasonic sensors have been the second choice for wind profilers. This is partially due to the perceived high cost and low concern for long lifecycles in the profiling and assessment market. Because ultrasonic sensors have no moving parts, they cost less to maintain and have longer life cycles than traditional cup and vane sensors. Sonic sensors are also ice resistant. In a recent test, some were proven to continue operation in extreme freezing rain and high winds as per MIL standard 810F, the US military standard for ice resistance. Future ultrasonic anemometers with intelligent interfaces will deliver added values such as electronic compasses and barometric pressure sensors.

Widespread use of mechanical sensors in the industry’s past has not only been a matter of price but of historical precedence for industry accepted measurement standards. Mechanical sensors are the only ones certified as Class A. Class A or Class 1 is the term for a sensor meeting the MEASNET, or IEC standards, or both. These standards qualify Class A devices for contractual applications, the verification with standards, and resolving disputes between the utility and end customers. The financial community follows suit so that some financiers will not accept data measurements from a wind project unless they are measured by Class A sensors. These became common name in the wind assessment business since its original release. Only a handful of mechanical sensors meet this regulatory standard for wind measurement, all are mechanical.

Despite the fact that mechanical sensors have a qualified international standard for performance, they do not always perform to that standard nor do they meet all qualifications. Issues of icing, start up speed, vibration, and poor tolerance to high wind gusts are just a few maintenance pitfalls to which these sensor users have grown accustomed. One study by the Center for Renewable Energy Sources (CRES) reported that mechanical sensors must be recalibrated after 12 months of field use.2 This is necessary because they have difficulty withstanding the impact of sustained wind over time and are susceptible to other environmental hazards.

Many large-turbine manufacturers have switched to ultrasonic anemometers as a lower maintenance means of controlling a turbine’s pitch and yaw. A turbine control anemometer acts as the turbine’s eyes and ears. Turbine control and project SCADA systems rely on this relatively small component to direct the turbine into the prevailing wind for best efficiency. If an anemometer’s moving parts freeze or break off, it stops all data transmission to the turbine controls. This “met fault” halts turbine operations. It is critical that the turbine cease operation when communication with the anemometer is interrupted. Should the turbine continue operating when not pointed into the wind, the shear across its blades can induce high and damaging strain on the machine.

Low sensor reliability means decreased wind farm reliability and significant profit loss for owners and utilities. “[Turbine anemometer] failure events aren’t just bad, they’re a nightmare for the utility” said one Colorado utility representative. “With more wind than ever feeding into the grid, this is true now more than ever.” The wind industry is looking to sensor reliability as a link to project reliability.

Other jobs for ultrasonics

Ultrasonic sensors can be used for wind profiling and turbine control the same way as mechanical sensors are used. Sodar as well as 2D and 3D mast mounted anemometers fall into the ultrasonic-sensor category. Two-D sensors measure wind speed and direction across a horizontal plane. Three-D sensors are used where more precise measurement of wind activity is required. Three-D sensors are common in meteorological research and for small-scale flow measurements in a lab.

Sodar (sonic detection and ranging) units measure vertical turbulence and wind profiles at lower atmospheric layers. Sodar systems are like radar except the equipment uses sound waves rather than radio waves for detection. Most sodar systems operate by issuing an acoustic pulse and then listen for the return signal for a short period of time. Generally, intensity and Doppler (frequency) shift of the return signal are analyzed to determine the wind speed, wind direction and turbulent character of the atmosphere.3 Lidar is similar. It uses laser light to detect changes in wind speed and direction.

Turbine manufacturers along with wind profiling and forecasting specialists still use mechanical sensors on a regular basis. These industry professionals say cup sensors provide more accurate and reliable data. A mechanical wind sensor can be the right choice when considering a:

• Shorter sensor life cycle is not an issue

Ultrasonics are newer technology. Change is always a challenge especially in an industry used to doing things fast and in a certain way. One leading developer familiar with both methods of meteorological measurement said “Consistency and price are main reason the industry has been reluctant to switch to ultrasonics…consistency that is changing now that the National Weather Service replaced their mechanical sensors with ultrasonics over five years ago.”5 Although more expensive, ultrasonics are the best choice when applications need:

• A long life cycle with little risk of
replacement