A variable-ratio transmission that uses gears and chains, but no belts, has been introduced for licensing and production by inventor Gary Lee, CTO of VMT Technologies (www.theuniversaltransmission.com). The transmission works by expanding or reducing the diameter of a “moon gear” that drives the chain, thereby changing ratios. It does not rely on friction, which means the transmission can handle more torque than a conventional CVT without it over heating and melting components. “Our high-torque engaged CVT will also improve transmission efficiency,” says Lee. 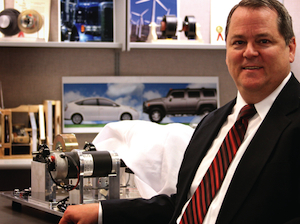 Conventional continuously variable transmissions (CVTs) use a pair of cone-shaped pulleys on the same shaft that are driven together or pulled apart to change the radius on opposing surfaces. But the belts or chains used in them depend on friction to transmit torque.

The company recently unveiled a working prototype for the wind power industry. “Wind power gearbox manufacturers told us, ‘Improve wind turbine efficiency by just 2% and the industry will beat down your doors,’” says VMT’s Sales Director Mike Agrelius. “Our engineers project improvements of 5 to 10%.” VMT received a patent for the transmission on February 22, 2011.

Lee says the Universal Transmission overcomes problems of conventional CVTs by using a metal chain with teeth that are always engaged with the moon gears on which it rides, so it transmits power more efficiently than a friction-based design. He says the moon gear solves what has been called the partial tooth integer problem. Agrelius adds that the transmission has great promise for the wind industry because it can work as a speed variator. For example, it would keep the generator turning at an optimum speed while the blades are kept at a pitch to provide maximum aerodynamic efficiency, thereby capturing more energy from the wind than a conventional drivetrain. The transmission would also allow eliminating the power electronics in the nacelle that are needed to turn the variable current and frequency from the generator into more manageable power, according to Lee. Another plus: the transmission will absorb the power in wind gusts rather than transmit them through the drivetrain, hence, lowering load on drivetrain components and improving time between maintenance and replacements. One of the larger problems facing the wind-power industry is the high cost of capital and maintenance regardless of transmission.

But what advantage might the transmission have with respect to direct drives, turbines without transmissions? Agrelius says direct drives might try to regulate shaft speed by adjusting pitch, and thereby sacrifice efficiency and power capture. Another plus for VMT’s transmission is that it would make better use of induction generators as opposed to permanent-magnet versions that rely on politically sensitive rare-earth materials, the availability of which have been trending downward. A nacelle cut away shows the space saving possibilities of the Universal Transmission.

Lee sees his Universal Transmission used in other power and transportation-based industries as well, trucking in particular. The company has no plans to manufacture the transmission, but rather license it to others. Over the past year, the company has met with transmission manufacturers such as Allison, Dana, and Ford.