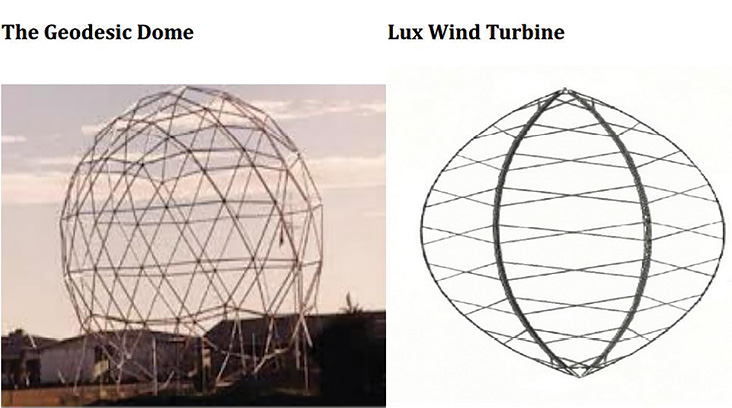 WHEN ENGINEERS CONTEMPLATE vertical axis wind turbines today, they only see the problems – vibration, torque ripple, and a low-power output. Solving these problems requires rethinking the structure, suggests engineer and inventor Glen Lux, President of Lux Wind Power. He has designed and built more than 30 vertical axis wind turbines (VAWT) over the past 10 years and thinks he has solved the well documented problems. Lux has data from Canada’s National research Council in Ottawa to back him up, and so believes his latest design can benefit the wind industry. In 2013, the Lux design won first place in a NASA Tech Brief contest, in the Sustainable Technologies category.

“Ten years ago, I started building two and three bladed turbines and saw their problems firsthand,” says Lux. “An initial thought was that a turbine with five or more blades would solve the problems. But adding more blades would require shortening the blade chord lengths, which would make the blades weak. The only logical way to maintain blade strength would be to connect the blades to each other by using beams or cables.”

An idea from the geodesic dome struck him: use pairs of cables that cross so they form triangles with the blade. It was Buckminster Fuller’s idea for his dome. It uses a pattern of self bracing triangles for maximum structural advantage. “I manipulated the cables in many configurations until I came across what I thought, was the correct number of cables crossing at the right locations,” says Lux. The program also estimated forces from the wind along the entire length of each blade. The Canadian researchers used these blade forces, added gravitational and centrifugal forces, and then calculated the blade stress at various wind speeds. Other smaller stress factors, such as wind gusts and turbulence, also contribute to the total stress, but were not included in these calculations.

To be sure they were not underestimating the maximum stress levels, the Canadian researchers multiplied the stresses by a factor of four, after which they calculated the life expectancy. The blades are still expected to last 62 years.

The higher power output, especially at 4 to 10 m/s wind speeds, is attributed to a larger rotor and swept area. Even though the rotor is larger, the low material costs are well below conventional turbine costs. A simple Traction Drive, 1:10 speed increaser, provides input to a gearbox, but a direct drive generator is also a candidate because the generator, regardless of design, would be at ground level for easy access.

Lux acknowledges some disadvantage, such as the need for more land, to accommodate guy cables. However, advantages of the design include elimination of the conventional turbine tower along with the pitch and yaw systems. The foundation is smaller and the modular blades can be transported in shipping containers. The blades have a constant profile, which is easier to manufacture and their material is fully recyclable. The mechanical components are at ground level and the center of gravity is low, which may be beneficial for offshore use. What’s more, some researchers believe that pairs of counter rotating VAWT can be spaced close together, extracting as much as 10 times more power from a given area of land.

“More research will benefit this design just as it did with the horizontal axis wind turbine throughout the past 30 years,” says Lux. “We are currently fine tuning the design of our 50kW prototype to prepare for testing and certification. We would welcome input from engineers who have an interest in VAWT.”