Meeting AEP or annual energy production targets is an ongoing challenge in the wind industry. AEP is the amount of electricity a wind farm generates over one year. While any faulty turbine component can impact energy production, analyzing the aerodynamic design of turbine blades is one of the first steps to optimizing a turbine’s wind capacity. 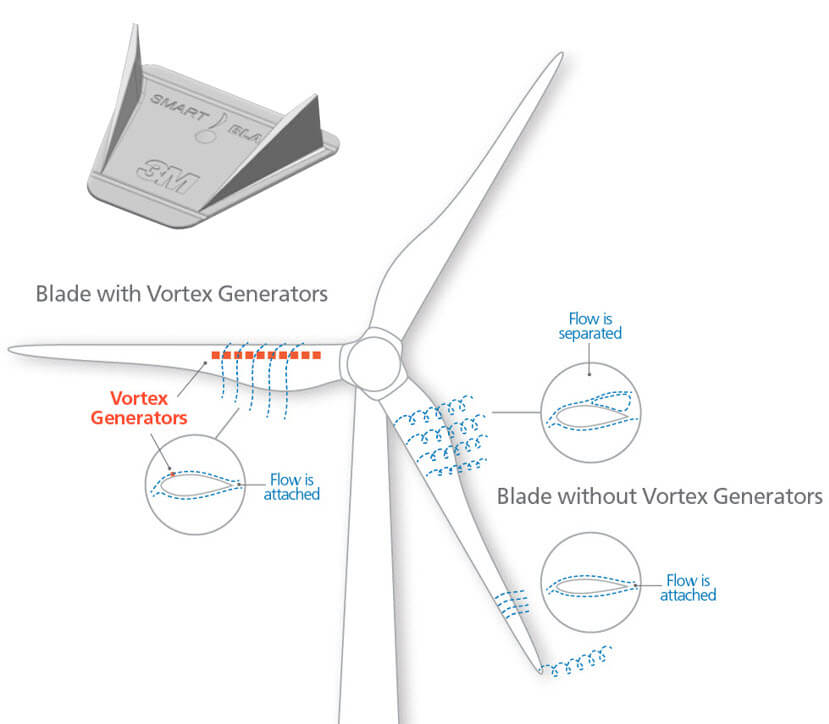 The blades of large pitch-regulated wind turbines typically have suboptimal aerodynamic properties at the root. Vortex generators, attached to the root section of a turbine blade, can help improve performance by energizing flow around the surface. This helps reduce flow separation and increases the performance of the entire turbine, in terms of power, loads, and service life.

Similar to an airplane wing, wind-turbine blades work by generating lift from their shape. Typically, blades are shaped to generate the maximum power from the wind at the minimum costs, but manufacturers are continually looking for ways to develop more efficient designs and increase production.

So, how can a wind operator increase wind-farm AEP from turbine blades? ” We have a few options,” shares Charles Kasmer, a Customer Account Manager with O&M provider, EDF Renewable Services. He first points to pitch and yaw controls, which refer to the blade angle adjustment and turbine orientation, respectively.

“We have pitch optimization, which a lot of OEMs are doing right now. They’re going in and adjusting pitch parameters for greater accuracy,” Kasmer adds. “We also have yaw optimization, which is correcting the yaw offset of a turbine tower. Then we also have a third option: blade aerodynamic optimization. This can be done through vortex generators or VGs.”

These small devices adhere to a turbine blade to modify the surface airflow and can optimize the aerodynamic performance.

“Vortex generators are not new technology. The aerospace industry has been installing VGs on airplane wings for decades to increase the lift. Recently, we have seen automobiles come out with VGs to increase efficiency.” Kasmer says the main reason VGs are attracting so much industry attention is because the devices offer proven AEP improvements. “In fact, many turbine and blade OEMs are now are offering VGs from the factory because the devices have a track record and can maximize a wind turbine’s output and efficiency.”

He says EDF Renewable Services recently announced a partnership to install 3M Wind Vortex Generators on all wind turbines the company services across the U.S. Each turbine blade has a unique shape and properties, so the position of vortex generators are customized for each blade to maximize performance.

A look at blade design
According to Santhosh Chandrabalan, the 3M Global Business Manager for wind energy, wind-turbine designers typically must balance manufacturing capabilities with efficiency. “A wind blade’s design cannot be aimed solely at maximizing aerodynamics,” he says. “Some design compromises can lead to aerodynamic stall, which causes a reduction in efficiency and lower AEP. Furthermore, surface roughness and leading edge erosion can amplify the issue.”

Unfortunately, these losses in efficiency can impact the bottom line for the wind turbine owner with untapped potential compounding throughout the years. Research shows that leading-edge blade erosion can cause up to 20% in AEP losses.

Enhancing blade performance
VGs can offset some of a blade’s efficiency losses due to design and installation limitations. These small attachments, typically made from metal or plastic, regulate the boundary-layer airflow by helping it stay attached to the turbine blade for a longer period — thereby, increasing lift and, hence, AEP.

Despite their benefits, VGs have come with a fair share of problems over the years. Kasmer points out that the devices have had blade-adhesion issues. “VGs occasionally fall off,” he says. “Adhesion has been our top concern because it leads to a number of other potential problems.” For example, there are environmental concerns where VGs have fallen off in farmer’s wheat or cornfields, affecting crops or farm equipment.

“Safety wise, we also have need to ensure that no one is at risk from a falling VG,” Kasmer says. “Yet another issue to take into account is costs. When a VG falls off, there are additional device and maintenance costs, not to mention a reduction in the AEP that we were initially forecasting.”

And then there is the cost to reinstall the devices, which leads to unplanned turbine downtime and lost AEP.

To develop a VG that works well for its intended role and adheres reliably, materials and the environmental conditions are key considerations. For example wind speeds, along with the location of a vortex generator, can vary the performance of VGs — and that means correct installation procedures are imperative. Although liquid adhesives have been used for installations, most adhesives are too rigid to stand up to the flexing forces caused by differences in the material properties of the blades and the VGs.

“First of all, it is important to start with a vortex generator that doesn’t age quickly, and that means selecting design materials that are long lasting. That’s easier said than done because at a wind farm, VGs undergo severe weathering, which includes heat, cold, wind, rain, hail, and so on. Next, it is necessary to use an adhesive that is durable and flexible.”

However, Chandrabalan and his team at 3M quickly learned that rigid adhesives are not an ideal solution for attaching VG’s. For attaching upgrades to a wind blade, an acrylic foam tape is often an excellent alternative to liquid adhesives and mechanical fasteners. Acrylic foam tape is durable, easy to apply, and can withstand dynamic residual forces even in harsh conditions. These tapes can be used for applications where reliable bonding or sealing is needed.

An acrylic foam tape has the advantage of flexibility, which accommodates the flexing and fatigue forces that are encountered by the turbine blade. It can also stand up to various temperatures and weather conditions the blade may be subjected to. These characteristics of the Acrylic foam tapes ensure that its functional qualities are kept intact even after five years of field operations.

Alongside material selection, Chandrabalan says it is important to consider the ideal position to install vortex generators on a particular blade. 3M, along with their partner Smartblade, have developed what it calls “Smart Visualization.”

“Smart Visualizations enables us to characterize the wind flow on a rotor blade to accurately identify the flow separation and address it,” he says. “By performing a thorough analysis and using a complex algorithm, we can figure out the optimal position to install the vortex generator on a particular turbine in the blade model. It helps us ensure that we have the optimum output from a VG install.”

The Smart Visualization analyzes different wind speeds, direction, and flow separation to optimize VG placement. The results? According to Chandrabalan, wind operators can expect to see a 1.5 to 3% increases in AEP, with the 3M Wind Vortex Generators. “Low-wind speed locations will typically see a better gain in AEP than higher wind sights.

So what does this all mean? “It means that wind operators can expect a payback period of about one or two years, depending on their wind farm. This includes installation cost, the material, and the downtime for the installation. Overall, it means VGs payoff in terms of increasing AEP.”