A rush to install wind turbines has outstripped the usual developmental learning curve, one in which new technologies mature by trial and error, and define equipment that is well suited for the job at hand. In this 21st century land rush to cash-in on wind energy, developers are often trading low initial costs for higher total costs of ownership which is eventually shouldered by wind farm owners and operators. Nowhere is this more evident than with wind-turbine generator (WTG) step-up transformers.

The WTSU model step-up transformer from Pacific Crest Transformers, intended for duty on wind farms, features round coils, a cruciform, mitered core with heavy-duty clamping and a proprietary pressure-plate design, as well as a premium no-load tap changer. Coil-end blocking with heavy duty 3 gauge steel bracing and proprietary pressure plates contains axial forces exerted during a fault condition. These forces can cause telescoping of the coils, shortening transformer life. A cooling system shortens the path that heat generated within core and coils must take to reach the cooling fluid.

These devices take the approximately 460 V from the generator and step it up to about 34.5 kV. Then a collector on the wind farm further steps the synchronized power from a group of turbines to that of the grid, often 138 kV or more.

Historically the WTG transformer function has been handled by conventional, off-the-shelf distribution transformers. But a relatively large number of recent failures has convinced many that WTG transformer designs must be substantially more durable.

The role of the WTG step-up transformer must be correctly analyzed and evaluated. The industry must move from equipment purchasing decisions based on lowest initial cost to equipment that provide a best choice in terms of total cost of ownership, network stability, and less down time and lost revenue from high maintenance issues. Recent transformer technology intended for wind farms should be considered when making purchasing decisions.

The yearly average load factor for a wind turbine can be as low as 35%. Previously, most utilities anticipated an operational loading of about 50%. The relatively light loading of the WTG transformer introduces two unusual problems that must be considered in their designs.

Historic price-evaluation formulas do not apply to wind scenarios. Previous purchasing decisions were based on an understated estimate of the transformer’s idle time. These evaluations considered transformer idle time, running time, and their ratio. Those looking to apply this mode to wind farms must be more cognizant of idle time. For example, National Electrical Manufacturers Association (NEMA) TP 1-2002 (in Guide for Determining Energy Efficiency for Distribution Transformers) and DOE say efficiencies are not modeled for an operational scenario in which average loading is near 30 to 35%. Wind farm developers should be cautious about applying these standards when calculating the total cost of ownership for WTG transformers.

The second problem is that WTG transformers are subjected to frequent thermal cycling as a function of varying turbine loads. This causes repeated thermal stress on the winding, clamping structure, seals, and gaskets. The loading situation is analogous to breaking a wire by repeatedly bending it back and forth. Metal fatigue, heat, and stress weaken the wire causing it to break. The same is true of electrical connections that have to withstand repeated thermal cycling, stress, and varying loads.

Repeated thermal cycling also allows absorbing nitrogen gas into hot dielectric oil (also for cooling) and releasing it as the oil cools, forming bubbles within the oil which can migrate into the insulation and windings to create hot spots and partial discharges which damage insulation. Thermal cycling also accelerates the aging of internal and external electrical connections.

WTG transformers switch with solid state controls to limit inrush current. While potentially aiding the initial energization, these electronic controls contribute damag-ing harmonic voltages that, when coupled with non-sinusoidal wave forms from the turbine, also contribute to the heat problem.

Normal voltage alternates at 60 Hz or cycles/sec. When the transformer frequency differs, voltage peaks do not line up and they do not produce the required amplification that would come from in-synch frequencies. The transformer tries to pass the voltage it sees through the circuit thereby causing extra loading. All electronics used today send spikes on line. Transformers must handle the higher loading in frequency disturbances and spikes. 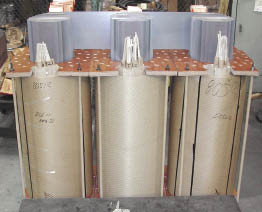 Coils in WTG transformers from Pacific Crest are wound on a cruciform mitered core. Circular windings have coolant flow ducts throughout which evenly spread radial and axial forces over their circumference, eliminating hot spots that lead to premature breakdown and ultimately transformer failure.

When using a rectifier-chopper system (the electronic controller in wind turbines) the WTG transformer must be designed for harmonics similar to rectifier transformers. These harmonics are called “dirty” because they may contain high frequencies that wind-farm owners do not want to send to the grid because they affect other equipment.

When dirty harmonics are sent, a protective equipment fault may occur, meaning transmission-grid equipment shuts down to protect itself. The WTG must be able to take the additional loading into consideration and provide electrostatic shields that prevent transfer of harmonic frequencies between the primary and secondary windings. The transformer must handle the stray energy and not transmit it to the grid.

Because of high up-front costs, no over-voltage capacity is designed into a WTG transformer to overcome the frequent voltage fluctuations inherent to wind turbines. WTG transformers are usually designed so their voltage exactly matches the wind turbine’s output voltage.

Generator output current is monitored at millisecond intervals. Operational limits allow up to 5% over-current for 10 s before a generator is taken off the system. Be-cause WTG transformers are intended to match generator output without overload sizing, the WTG must function without extra capacity.
Riding through faults

Typically, conventional distribution trans-formers, power transformers, and other types of step-up transformers ‘drop out’ when subjected to a fault. Once the fault has cleared, the distribution transformer is brought back on-line. To maintain network stability, wind-turbine generators are not allowed to disconnect from a system with network disturbances, except within certain guidelines developed for generating plants. Generators must be able to stay on line through a fault and be mechanically, electrically, and thermally able to handle the fault. This is called “fault ride-through.”

The length of time a generator is requir-ed to stay on line can vary. During this period, the generator continues to deliver an abnormally low voltage to the WTG transformer. For example, during faults, the transformer may be required to carry as low as 15% rated voltage for a few cycles and then ramp back up to full voltage in a few seconds after fault clearing. The WTG transformer must be sufficiently rugged so it can with-stand full short-circuit current during the first few cycles when the maximum mechan-ical forces are exerted upon the WTG transformer windings. WPE