This article from AWS Truepower is authored by Bruce Bailey and reposted with permission.

About a decade ago, the wind industry became aware that wind farms in general were producing less energy than predicted. At that time, projects were falling short in production by roughly 10% on average relative to preconstruction P50 estimates made several years earlier. This phenomenon led to the well-known “haircut” that investors and lenders began applying to correct energy projections for what was being experienced in the field. Since then, the causal factors for underperformance (or over-prediction, depending on your perspective) have been largely discovered and accounted for in today’s energy prediction techniques. Preconstruction energy estimates are now much closer to what projects actually produce, but significant gaps sometimes still occur. Let’s explore why, beginning with how the underperformance syndrome got started.

Origins of Underperformance
Back in the late 1990s and early 2000s, the wind industry was focused on development and did not have the sophisticated wind farm operations management systems that are in place today. By 2004, only ten percent of today’s global installed wind capacity had been built. Still in the emergent phase, the industry hadn’t yet achieved the critical mass of operational history needed to signal a widespread underperformance problem. 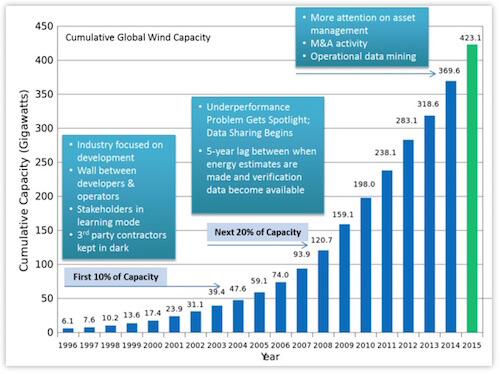 There was a communications problem, too. The development and operations sides of many wind energy companies effectively operated as separate businesses. A company team responsible for getting projects developed had little interaction with the team responsible for construction and operations, so there was little opportunity for constructive feedback. Even third-party contractors involved in making preconstruction estimates of future energy production were kept in the dark about how the wind farms they had a hand in designing were actually performing. Performance and maintenance data was closely held and not shared outside the company.

By 2008, over 25% of today’s global wind capacity was in operation. The underperformance problem was then in the spotlight, thanks in part to much better data sharing among parties. A blame game got underway as well, resulting in finger pointing that revealed a lack of understanding about the real underlying factors.

The Main Factors
The industry has since learned a lot. There is a large base of operational experience now available, and communications on performance issues is more open. Once wind plant performance data became more widely shared, it was quickly learned that there were two primary contributors to the underperformance syndrome. The first was higher-than-expected losses related to wind farm availability, and the second was sub-optimum turbine performance. Lesser factors included variations in year-to-year windiness, larger-than-modeled wake losses and unrepresentative wind resource data.

Filed Under: Financing
Tagged With: awstruepower