Windpower Engineering and Development staff members have left Chicago and AWEA’s Windpower 2013 conference, but the photos endure. Below is the final installation of the Windpower 2013 photoblog. Enjoy! 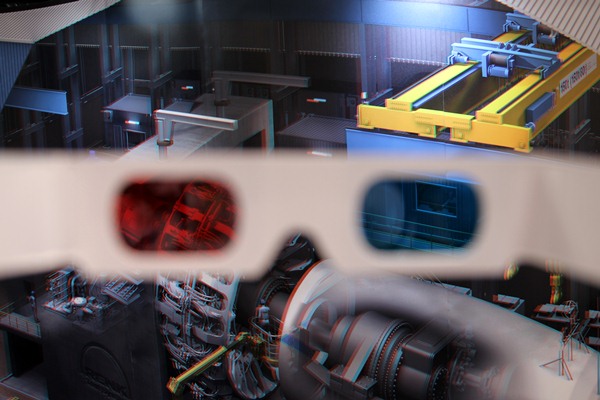 Clemson University and its partners are building a 15-MW grid simulator – seen here through 3-D glasses (OK, I’ll admit it doesn’t really work this way). The size of the simulator is required to mimic real-world circumstances including wide-area power disruptions, harmonics, and voltage dips. Helical Robotics developed remote-controlled machines to scale turbine towers with payloads up to 100 lbs. Here, vice president of engineering and design Keith Schlee demonstrates a robot that can carry up to 5 lbs. The company also makes robots that are smaller, come with mounted cameras, and can fit inside blades.

The Aeroscraft, which Windpower Engineering and Development will feature in its next edition, could ease transportation logistics for wind developers around the world. The earliest version of the lighter-than-air vehicle will carry up to a 66-ton payload. “The reception has been overwhelming,” said John Kiehle, a spokesperson at Aeros. Wazee, a Timken brand, operates H&N Wind and provides full-service wind turbine generator repair and operations and maintenance. The company says it stays at the forefront of wind-energy technology by leveraging previous experiences with investments in new information. Dr. Shrink’s propane-fire shrinkwrap tool, which looks a bit like a ray gun, heats shrink wrap to cover a variety of objects, from boats to nacelles. “The high-tech wave of the future has now arrived,” representative Mike Stenberg said. 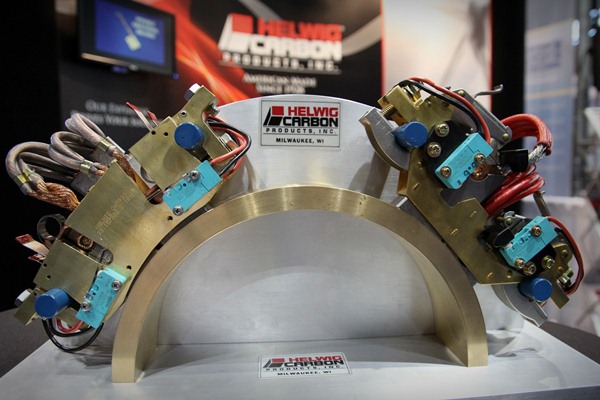 Helwig Carbon Products showed two electric brush holders at its booth. The holder on the right is a standard holder used by OEMs. Helwig representatives said it was unnecessarily complex, while the company’s own holder, on the left, will improve brush life and reduce maintenance costs. Universal Air Filter manufactures custom air filters, EMI vents and screes. The company is headquartered in Illinois, but also has offices in China and The Netherlands. I snapped this picture right before it was time to board my own mode of transport – a plane back to Cleveland. Vectora Transportation has moved more than 3,000 wind components across the country by truck, sea and rail since 2008.

And that’s it for the AWEA Windpower 2013 photoblog series. I hope you had a great time in the windy city and helped make business move. Here are the previous photoblogs: