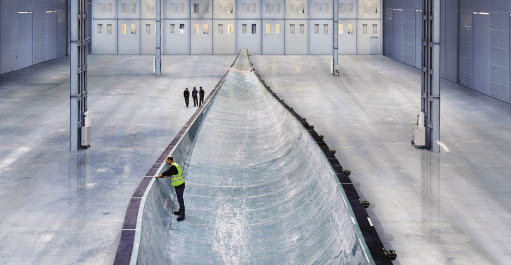 The B75 blade is the world’s largest fiberglass component cast in one piece. Manufacturing it posed several challenges for the project team. In particular, the mold had to consist of two parts so that it could be transported.

Wind turbine manufacturer, Siemens (www.siemens.com), has developed the SWT-6.0 with a rotor diameter of 154m to meet the demanding conditions of offshore wind. Unique to the model is the B75 rotor blade, which is 75-m long making it the world’s largest fiberglass component cast in one piece. These IntegralBlades have no adhesive joints and are 20% lighter than traditional blades, says the company. One of these turbines could supply up to 6,000 European households with clean energy. The SWT-6.0-154 also has special aerodynamic profiles to deliver optimum performance at a wide range of wind speeds which helps lower the cost of wind energy. 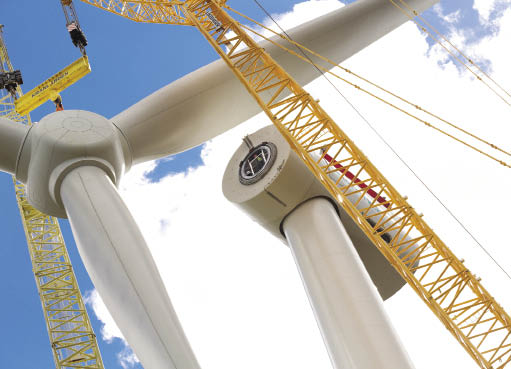 Siemens B75 rotor weighs about 25 tons. Each rotor consists of three B75 rotor blades, including the hub. The rotor is lifted by cranes to the top of the wind turbine tower. Once rotating, tip heights will reach 200m.

“The new 6-MW turbine is a milestone in wind energy technology,” says Henrik Stiesdal, CTO, Siemens Wind Power. “Compared to our first 30-kW turbine, developed 30 years ago, the new SWT-6.0-154 will produce over a thousand times more energy per year. The rotor-blade development is equally impressive. The first blade of the 30-kW turbine was five meters long, about the length of a minibus, while the new 75-m rotor blades have a length about that of an Airbus A380.” It is the largest wind turbine rotor in operation to date. The company expects the turbine to become the workhorse for the expansion of offshore wind power.

The turbine is the third direct-drive model developed by Siemens. It significantly simplifies the wind turbine design. For instance, its towerhead mass of roughly 350 tons with a nacelle weight of 200 tons makes the SWT-6.0-154 one of the lightest machines in its class. The nacelle features a helihoist platform that gives service technicians easy and safe access. The nacelle also houses fewer parts than geared wind turbines providing easy access to key components. The company says this combination of durable design and relatively low weight reduces offshore infrastructure, installation, and maintenance costs. The first SWT-6.0-154 offshore wind turbine will work in Østerild, Denmark. The direct-drive machine is equipped with the world’s longest rotor blades, each measuring 75m.

The SWT-6.0-154, erected at a national test center in Østerild, Denmark, was formally released at the inauguration of the test center last October. Siemens is also changing industrial standards for component testing by running every component through a simulated 25 years of accelerated lifetime testing. WPE