Wind energy has steadily become one of the strongest components of electricity generation in the United States over the past 30 years. According to the U.S. Energy Information Administration, costs to produce wind energy continue to go down, while incentives to produce it — from the government’s production tax credit (PTC) and other programs­ — have significantly improved its competitiveness when compared to fossil fuels.

The overall electricity generation from wind in the United States reached 338 billion kWh in 2020 and was the source of about 8.4% of the total U.S. utility-scale electricity generation. And with the promised investments in wind energy in the current U.S. administration’s infrastructure plan, the percentage is only expected to increase in the coming years.

The increase in wind production, however, leads to the following question: What kind of industrial enclosed and open gear lubricants are necessary to keep these machines in working order so they can be relied on to produce the ever-increasing electricity needs of the country? As the sophistication of wind turbines increases, so must the sophistication of gear lubricants.

New fluid technologies can improve traction coefficients, film thicknesses, energy efficiencies and temperature reductions. The introduction of new, versatile performance polymers (PP) can significantly improve the end-use behavior of these lubricants. This article will examine the role of PP in current lubricant technology and what significant improvements they provide for both industrial and open gear systems. Enclosed gearboxes are key components in the nacelles of many wind turbines. To keep these systems operating at maximum efficiency, the gears must be appropriately lubricated with a suitable viscosity- grade industrial gear oil (IGO) formulated with the right performance credentials.

Recently, there has been a drive to develop advanced gearboxes that are specifically designed to meet the demand for higher power throughput. Wind turbine gearboxes are significantly affected by the harsh operating conditions of wind farms, including load variation, vibration, temperature and fluctuation in wind speeds and direction. As a result, micropitting and white etching cracks appear on wind turbine bearings and gearboxes, which can amplify and lead to pitting, tooth breakage and other catastrophic failures over time. Industrial gear oils play pivotal roles in maintaining the durability of gearboxes and preventing unplanned downtime.

In addition, higher operating temperatures can adversely affect the oil life because additive packages get used up faster. Depleted additive packages can cause durability issues like scuffing and micropitting. The viscosity of the fluid changes with temperature, leading to poor film thickness and affecting tribological properties. As a result, parts fail in an untimely fashion. Reducing operating temperatures by even a few degrees can help maintain the oil life longer and ensure the durability of gearboxes.

Wind turbine gear oils are expected to have long drain intervals. Today, a seven-year oil drain interval has become the norm. Therefore, IGOs must be formulated to protect the gear surfaces and offer optimum performances for longer times. They must:

The key challenge of conventional synthetic IGOs, however, is high price, which can increase the total cost of ownership significantly. With the growing demand of wind energy, wind-farm owners, operators and oil marketers are in search of alternate ways to formulate synthetic IGOs to reduce the total cost of ownership while improving the performance and extending the oil drain interval.

Open gears in wind turbine applications are used to adjust the pitch of the blades and to rotate the nacelle for optimum wind capture. They can range in size from about 1 m (3 ft) in diameter for pitch mechanisms to larger than 6 m (20 ft) for yaw bearings under the nacelle. They take months to manufacture and cost upward of $100,000, so keeping them in appropriate working order is paramount.

Most industrial open gear systems are typically designed for single-direction operation with low-to-moderate peripheral velocity. In blade pitch applications, the gear set moves quasistatically through an arc of about 90°, but in the yaw mechanisms, they may complete arcs or entire revolutions depending on the variability of the wind direction (though most of the time they are stationary). Ideally, they operate at temperatures between -20˚C and 50˚C. When used in offshore applications, the open gear lubricants (OGLs) also need to be able to prevent salt water/salt fog corrosion of the mating gear tooth surfaces.

As a result of their cost and the difficulty of replacing them easily, it’s important to maintain them with the proper OGLs. The global open gear lubricant market is approximately 12,000 metric tons. OGLs need to be designed for boundary and mixed lubrication applications as the gear begins to move and starts to pick up speed.

Over the past 50 years, OGLs have evolved significantly. Historically, OGLs were made of asphaltic bases without significant additive treatments, and there was no differentiation for OGLs based on end usage. Over time, OGLs have become more complex as scientists began to recognize that different open gear applications required different types of lubricants.

In the 1970s, scientists began differentiating types of OGLs based on end use and came to realize that while some open gear systems required compounds, other systems required grease. As lubricant manufacturers continued to investigate the way OGLs were used, they began to change their understanding even more.

Today, most OGLs are divided into two different classes: mobile machines and stationary equipment. Mobile machines use semi-fluid greases, which include low-viscosity oils and solid lubricants. They require low-temperature pumping and must be able to handle hanging loads.

Stationary equipment, in contrast, must produce full-film lubrication, provide wear protection and load carrying, and allow for easy tooth inspection and disposal. However, for wind turbine applications, the same OGLs are used for both pitch and yaw applications. The original black lubricants were replaced with clear viscous liquids to make gear tooth inspection easier.

These PPs have unique architectures and are versatile, with superior thickening efficiency and excellent shear stability. They reduce traction coefficients and dissipate heat faster, improve energy efficiency, and exhibit thermal and oxidative stability. Because of these properties, the PPs allow for versatile applications, including synthetic industrial gear oils and open gear lubricants for wind turbines.

In OGLs, the PPs provide versatility, either as a viscosity modifier or base fluid. They also provide improved performance characteristics to OGLs and product sustainability, as well as reducing lubricant consumption and energy usage.

As the United States increases its wind energy capacity, it will be important for manufacturers and developers to understand the most low-cost, effective way to protect their industrial gear and open gear systems. With the increased use of synthetic lubricants containing performance polymers, such protection will become that much easier. Dr. Gareth Fish is an internationally recognized lubricants industry professional with more than 32 years of experience who joined Lubrizol in 2007. He has authored more than 60 technical papers on grease and tribology and been awarded three U.S. patents. Dr. Fish earned a B.S. in Chemistry and a Ph.D. in Tribology from Imperial College of Science, Technology and Medicine, in London, England. 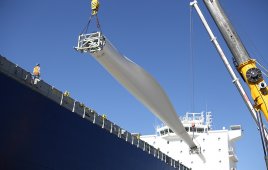