Wind-farm developers are constantly looking for ways to reduce costs, while increasing turbine efficiency. Spain-based turbine manufacturer Gamesa has made several important steps to address such challenges with their recent 4.5-MW G10X. As the company’s most extensive R&D project to date, the turbine minimizes energy costs with transportation and assembly equipment similar to that required for the 2-MW G8X unit. The new model features lighter blades, a compact power train, and its own crane, making it our turbine of the month.

For on-shore tasks, the 62.5-m blades of the G10X are manufactured and transported in two sections, and assembled on-site with a screwed joint covered by masking. Fiber-optic sensors molded into the root of the blade measure loads and send this information to a multivariable control system designed by Gamesa called MultiSmart. It uses the data to individually adjust the pitch in each blade to minimize vibrations and reduce loads on the entire turbine up to 30%. This aerodynamic design and advance monitoring and controls minimize the turbine’s total structural loads, making it lighter, which allows maximum energy production. 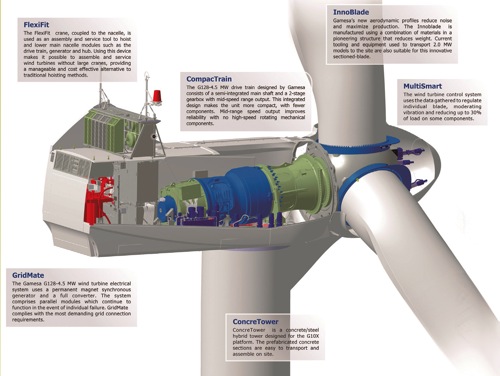 The G10X turbine has a variety of features that make it cost-effective to install and maintain. Gamesa will include many of these features in the development of their G11X 5-MW off-shore model.

Also, the turbine’s design is based on a compact power train, with a medium speed two-stage gearbox, permanent-magnet generator, and a full converter. The relatively compact assembly needs fewer components than a more conventional turbine of the same power requires. The medium-speed gearbox output eliminates the need for mechanical components that rotate at high speeds, increasing system reliability. The turbine’s electrical system, which the company calls GridMate, is based on a permanent-magnet, synchronous generator and a full converter. The system consists of six parallel modules, so if any of them disconnects, the rest continue to operate. The manufacturer says GridMate guarantees the ability to meet the most demanding grid connection requirements.

The turbine’s tower is a hybrid design, consisting of a lower concrete section and upper steel sections. Prefabricated concrete panels allow easier transport and in-field assembly than conventional designs. Transport is further simplified by shipping the nacelle with only converter cabinets and yaw system. The other modules are assembled on-site using a light auxiliary crane. The nacelle is placed on the tower in the last assembly phase with a standard main erection crane, similar to that required for the installation of the G8X. Thereafter, all assembly is carried out using Gamesa’s FlexiFit crane and a small auxiliary crane. The portable FlexiFit, which can be used throughout the wind farm, connects to the underside of the nacelle and operates as an assembly and service tool to raise and lower the nacelle’s main components, such as the drive train, generator, and hub. The Flexifit improves flexibility in assembling and servicing the turbine, because it eliminates the need for an external crane and is easy and cost-effective to transport to the site when needed. Gamesa also offers weather forecasting with detailed information on conditions at and around wind farms. The service provides accurate weather assessments to enhance turbine performance. Turbine operators can view forecasts hourly and up to seven days in advance, as well as wind-farm outputs. The manufacturer plans to add new features to the service, including forecasts for precipitation, temperature, and relative humidity. Gamesa’s FlexiFit crane connects to the underside of the nacelle to raise and lower the drive train, generator, and hub. The crane can also be used throughout the wind farm and operates as an assembly and service tool.

A G10X prototype has been operating in Spain since October 2009. The turbine’s 350+ components have gone through extensive testing. The company recently launched the turbine globally.

Based on the G10X platform, Gamesa is currently developing the G11X 5-MW off-shore model in partnership with shipbuilding company Northrop Grumman. The turbine will feature predictive monitoring systems, and the company expects to have a U.S. prototype running by end of 2012.