The design features a blade-mounted plasma flow actuator, a software controlled, solid-state electrical device that is simple and inexpensive. When a blade-embedded sensor detects deflection, software would signal the device to generate plasma that modulates the aerodynamic lift and drag forces, similar to the effect of trailing edge flaps in airplane wings.

Each device weighs only a few ounces and would be placed on the outer 20 to 30% of the blade length near the tip. An electronic driver weighing a pound or two would mount inside the blade and provide 8 to 12 kV signals to the plasma generators. The device is based on patented technology developed at the University of Notre Dame. Aquanis has an exclusive license to the patent portfolio for the wind energy field of use.

All remedies tried to date use moving parts and are costly and complex to implement. “The simplicity of our plasma actuator technology provides the basis for an inexpensive, no-moving-parts control system that will let wind turbines react instantly to changes in the wind,” said Aquanis CEO Neal Fine. And an improvement in aerodynamic efficiency can reduce material cost and extend the service life of utility-scale wind turbines.

The market for the device includes new wind-turbine construction, about 25,000 utility-scale turbines per year with a total capacity of 63 GW. This market is expected to grow 12% per year through 2025. 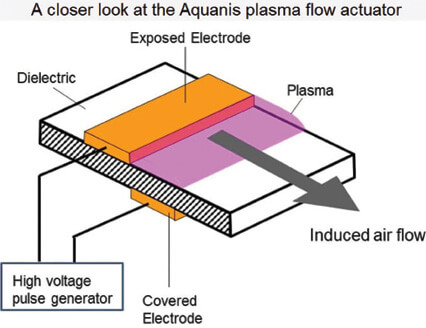 Fine says he is targeting the top 10 wind-turbine manufacturers which include Vestas, Siemens, GE, Goldwind, Enercon, and Suzlon. Combined, these companies own about 70% of the global market. “However, they want to see wind tunnel data before they commit to anything,” he adds. And that is what the company is now working on. What’s more, the six-month NSF grant will fund development of a new design of the actuator that is expected to at least double its efficiency.

Repowering is another target market. Although Fine does not see modifying existing blades, the device could be a driver to replace the blades especially if a refurbished turbine with a 10% longer blade and plasma actuators can produce 20% more power, without exceeding the load limitation on the existing tower and foundation.

The company says it has received a National Science Foundation Phase I Small Business Innovation Research (SBIR) grant of $224,969 for the development and testing of the device. The firm was also awarded an Innovation Voucher grant from the Rhode Island Commerce Corporation, which will provide $50,000 in funding to support the company’s research partners in Brown University’s School of Engineering. RICC also awarded the firm a $45,000 SBIR Phase I matching grant to supplement the NSF award.

To explore a range of system designs, the company needs access to state-of-the-art computational tools. The RI Innovation Voucher provides that, with access to Brown University researchers who have developed advanced computational fluid dynamics tools that will assist in Aquanis’ product design.