U.S. adoption of offshore wind technology has been slow compared to European counterparts. Europe’s first offshore wind installation, Denmark’s Vindeby, came online in 1991 with a capacity of 4.9 MW. The U.S. National Renewable Energy Laboratory (NREL) has estimated that the winds off U.S. coasts could generate four-times the electricity the country needs. Yet two decades after that first offshore project in Denmark, Europe had eight operational offshore wind farms while the United States had none.

As late as 2020, Rhode Island’s Block Island Wind Farm was still the United States’ only commercial operating offshore wind installation, which came online in 2016. A small pilot project has become active off the coast of Virginia. Roughly 30 other projects remain in various forms of development.

Several factors play into this difference between EU and U.S. markets. The permitting web reaching across U.S. government agencies, including the Bureau of Ocean Energy Management (BOEM), the National Oceanic and Atmospheric Administration (NOAA), the U.S. Army Corps of Engineers and the Fish and Wildlife Service, is one factor. Projects must plan how to limit environmental impacts on surroundings and on local wildlife, as well as how to comply with acts like the Rivers and Harbors Act prohibiting obstruction or alteration of navigable waters without a permit.

Additionally, the Jones Act may limit turbine size or project timing due to a short supply of American vessels available to move components from port to project location. The Jones Act requires goods passing between U.S. ports to use ships built in, with ownership based in, and operated from the United States.

Such government red tape can cause unexpected delays. The much-anticipated Vineyard Wind project off the coast of Martha’s Vineyard recently withdrew its application for federal approval the same week it announced it would use GE Haliade-X turbines in first-phase development. According to the press release, this was done “to allow the project team to conduct a final technical review associated with the inclusion of the Haliade-X into the final project design.” Such delays underline the challenges the industry still faces.

This is not to say European projects are without permitting issues. But the European wind industry has been working since the mid-2010s to shorten administration authorizations from 55 months to less than half that.

As more U.S. companies dive into offshore wind, environmental and permitting issues should be a primary consideration in project plans. These decisions are often predicated by location and foundation choice. With environments differing off the coasts of California and New York, it’s important to realize the different foundation options for offshore wind projects. Offshore wind foundation types. From left to right: monoplile, jacket, twisted jacket, tension-leg floating platform, semi-submersible platform, and spar-buoy. Some of these foundations will be discussed below. Illustration by Josh Bauer/NREL 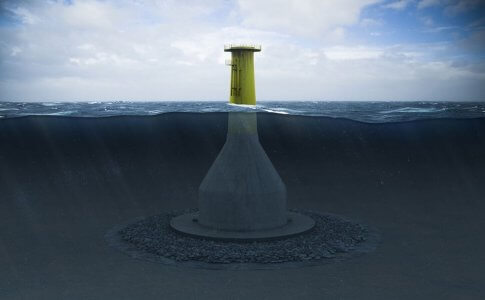 Gravity-based foundation. Image by Seatower AS

Designed from precast concrete and suitable for sites to depths up to 30 m, gravity-based foundations (GBFs) use gravel, sand or stones for ballast.

Steel monopile foundations can be used to depths to 40 m. They are a common choice for offshore turbines located in shallow water (less than 35 m).

Designed for use to 50 m, tripod foundations have three-legged tripod bases connected to a cylindrical central column below the waterline. Above the waves, it looks like a monopile. These are different from tri-pile foundations (not discussed here) where three individual pile legs connect to a central support tower above the waterline. Floating technology has already been used successfully in places like Scotland and Portugal, with more European projects in development. But thus far, U.S. development has been limited to pilot projects like the University of Maine’s VolturnUS, which has worked to develop low-cost floating hull technologies to take advantage of Maine’s offshore winds while limiting impact to the state’s fishing and tourist industries. However, projects are now in development on both the East and West Coasts.

Consider the disadvantages noted above as part of the larger picture — effects are usually limited to areas near the foundation site. Meanwhile, as the world changes to clean energy from fossil fuels, it creates a positive impact on the environment as a whole.

Technology writer Marla Keene works for AX Control, an industrial automation parts supplier located in North Carolina. She writes about AR/VR, drones, green tech, artificial intelligence and how technology is changing our world. Her articles have been featured in Power Magazine, Robotics Tomorrow and on other industry sites. Before working for AX Control, Marla spent 12 years running her own small business.