Editor’s note: This executive summary comes from a report authored by Peter Mock and Zifei Yang, both with the International Council on Clean Transportation. This should be good news for electric utilities and the wind industry because EV growth will create demand for the power they generate.

Governments around the world—motivated by long-term targets for climate change mitigation and reduction of petroleum use—have set goals to increase electric vehicles’ future market share. In support of these goals, some governments have enacted direct subsidies, fiscal incentives, and regulatory policy to help accelerate the movement of electric vehicles into the marketplace.In the meantime, the number of electric vehicle models is increasing as early market adopters have begun to purchase these advanced-technology electric vehicles. The global sales of electric vehicles have about doubled in each of the past two years, from about 45,000 vehicles sold in 2011 to more than 200,000 in 2013. However, in the context of overall automobile sales, the consumer uptake of electric vehicles has been generally limited to less than 1% in nearly every major auto market. There are clear differences in the taxation benefits provided for electric vehicles and sales of electric vehicles across the major vehicle markets. Total fiscal incentives summarizes the relationship between the equivalent per-vehicle fiscal incentive provided in each region (in percentage of vehicle base price, on the x-axis), and the respective passenger car market share of BEV and PHEV for 2012 and 2013 (y-axis). 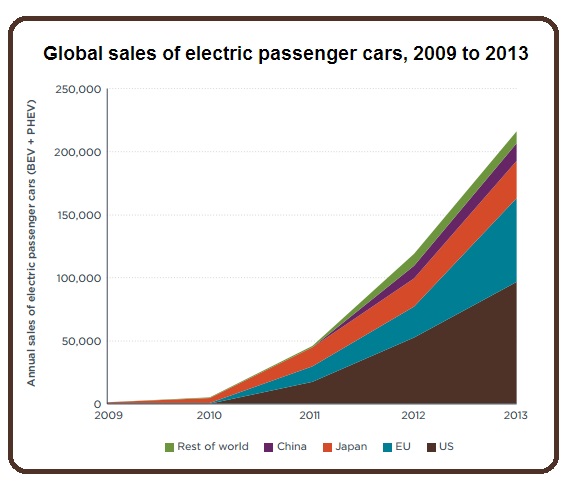 These two examples indicate how national fiscal policy can offer a powerful mechanism to reduce the effective total cost of ownership and entice consumers to purchase electric vehicles. The research findings indicate that fiscal incentives matter, but are clearly not the only factor that influences today’s electric vehicle market growth. For example, despite a relatively high level of fiscal incentives, the current market share of EV in the United Kingdom (UK) was found to be low in comparison with other markets. Many confounding factors mean that a clear direct relationship remains elusive between national fiscal incentives and electric vehicles’ early market growth across each of the major vehicle markets—as seen in the spread of the data and the lack of an obvious trend line in Figure ES-1 above. This indicates both the limitation of fiscal policy and also the limited understanding of all the underlying factors and other policies that could help drive and sustain the electric vehicle marketplace.

As a result, a more comprehensive study is needed of the full portfolio of policy actions taken to accelerate the early electric vehicle market—and their impact on the effective total cost of ownership. Such a study would investigate the importance of vehicle manufacturer policy (emission standards, electric vehicle requirements), infrastructure (residential equipment, public charging), electric utility actions (time of use charging), and other local policy (reduced rates for toll roads, preferential parking), along with the consumer fiscal policy evaluated here. A more comprehensive and rigorous assessment would help inform the development of a longer-term policy path that is less dependent upon large initial-year taxation incentives.

Filed Under: News
Tagged With: international council on clean transportation