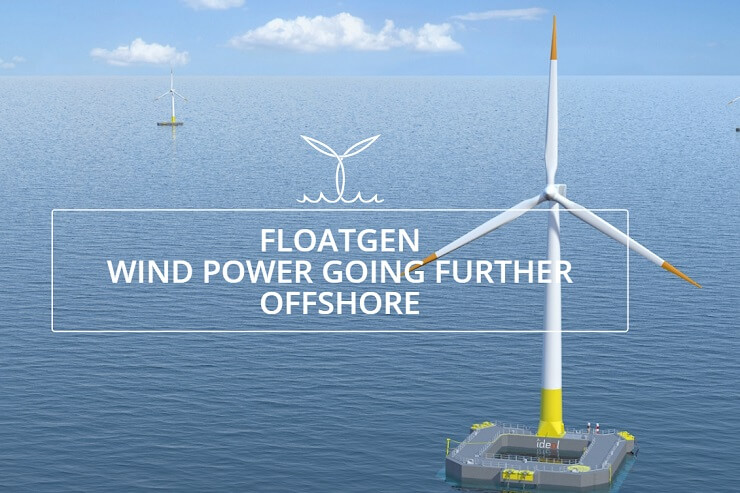 Ideol’s innovative solution is at the heart of multiple demonstrations and pre-commercial floating offshore wind projects in France and Japan, including the Floatgen project currently under construction off the Atlantic coast of France near Saint-Nazaire.

Ideol’s innovative solution is at the heart of multiple demonstrations and pre-commercial floating offshore wind projects in France and Japan, including the Floatgen project currently under construction off the Atlantic coast of France near Saint-Nazaire (http://live.floatgen.eu/).  Gaelectric is one of Ireland’s leading renewable energy and energy storage groups with significant interests in both onshore and offshore wind energy development and operations, including its North Irish Sea Array (or ‘NISA’) co-venture with Oriel Wind Farm Ltd.

Ideol’s floating foundation using its proprietary ‘Damping Pool’ technology can withstand open sea conditions and is the only floating sub-structure that can be moored in both shallow and deep water. The foundation is particularly suited to the next generation of extra large wind turbines and is less invasive on the seabed compared with bottom-fixed foundations. Ideol’s floating foundation and its proprietary ‘Damping Pool’ technology can withstand open sea conditions and is the only floating sub-structure that can be moored in shallow or deep water.

Witnessing the signing of the Memorandum of Understanding agreement between Ideol and Gaelectric at a St. Patrick’s Day event in Cannes, Irish Minister for Social Protection, Mr. Leo Varadkar TD said: “I am delighted that Ireland and France are co-operating in this common goal of harnessing the energy potential of the marine environment. This initiative and agreement between Ideol and Gaelectric has the potential to make a major contribution to sustainability and employment in Ireland and France.”

Also commenting, Gaelectric Founding Shareholder, Brendan McGrath, said: “In Ireland, we are blessed with significant reserves of wind energy which are having very tangible impacts in driving energy prices down and improving the sustainability of electricity generation. The development of onshore wind projects is well understood. However, the potential for offshore generation is enormous and holds the prospect of significant benefits for Ireland. Offshore wind speeds are faster and more consistent. We should also be able to deploy larger turbines with the prospect of moving up to 10 MW turbines from the onshore levels which are currently in the region of 2 to 3 MW.

The Irish government’s Offshore Renewable Energy Development Plan has identified a potential for the generation of 27,000 MW from floating offshore wind in Irish coastal waters. Ideol’s floating foundation technology opens up the prospect of creating an enduring, sustainable indigenous industry along the west coast and provides Ireland with the opportunity to rebalance available job opportunities while creating a significant energy hub in western towns and ports. A fully commercial scale offshore project of 500 MW capacity based on Ideol’s technology has the potential to create up to 2,500 construction jobs with a further 200 in maintenance.”

Ideol Chief Executive Officer, Paul de la Gueriviere added: “We are very excited at this opportunity to collaborate on a multi-unit demonstration project and explore additional commercial -scale projects with Gaelectric, a leader in the renewable energy space. Our industry-transforming “Damping Pool” technology is perfectly suited to Ireland’s weather and specific sea conditions. It will also use local materials and labor and meet all cost-competitiveness expectations. It can be mass-produced using existing local infrastructure and offers all the advantages one can expect from floating offshore wind solutions such as quay-side wind turbine installation and offshore installation using cost-efficient and readily available vessels.  After France, Japan, Taiwan and the UK, we are proud to have our technology recognized in a promising market such as Ireland.

During the initial phase of our collaboration with Gaelectric we intend to take full advantage of our unique ability to be installed at depths as shallow as 30m. This 30MW+ project will complement the insights and data we will be accumulating from our French and Japanese demonstration and pre-commercial projects and pave the way for our commercial-scale projects.”