Looks like GE’s been busy lately, though for one of the world’s largest companies that in itself is nothing new. What is: For one, the turbine manufacturer recently installed its 15,000th 1.5-MW model at Basin Electric Power Coop.’s Crow Lake wind farm in South Dakota. The turbine is one of 108 GE units commissioned at the site, and will be owned and operated by Mitchell Technical Institute (MTI),  providing a learning opportunity for students in MTI’s Wind Turbine Technology Program.

MTI was able to fund the project through a grant from the U.S. Economic Development Administration, as well as funding from the South Dakota Governor’s Office of Economic Development, Basin Electric Power Cooperative, General Electric and MTI. Construction at Crow Lake began in October of 2010. GE says the project spans three counties in South Dakota and is the largest wind project in the United States owned solely by a cooperative, with a capacity of 151.5 MW.

In other news, GE has also acquired technology from Wind Tower Systems that will allow taller towers, while lowering installation and transport costs.  The need for taller, cost-efficient towers is becoming an important factor in the wind industry as blade lengths increase. WTS has been working on the development of a space frame tower system for use at wind farm sites that require hub heights of 100 m or more. The manufacturer says the tower will handle static and dynamic loads generated by the turbines. 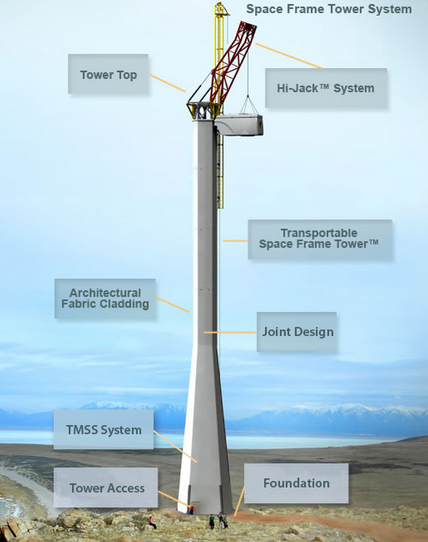 WTS also has focused on ways to transport and install these taller towers. They will use standard flatbed trucks and a hi Jack system to eliminate the need for heavy-lift cranes. These developments help cost effectively extend the tower height, which in turn enables the turbine to produce more energy. As Victor Abate, vice president of renewable energy for GE Power & Wind, explains, “Taller towers are an important complement to longer blades. Longer blades capture more energy and in turn improve return on investment for wind farm developers.” Plans are underway to install a prototype of the GE’s space frame tower system to test later this year, with commercial availability targeted for 2012