The Global Wind Energy Council recently released its annual market statistics. The 2017 market remained above 50 GW, with Europe, India and the offshore sector having record years. Chinese installations were down slightly – ‘only’ 19.5 GW – but the rest of the world made up for most of that. Total installations in 2017 were 52,573 MW, bringing the global total to 539,581 MW. 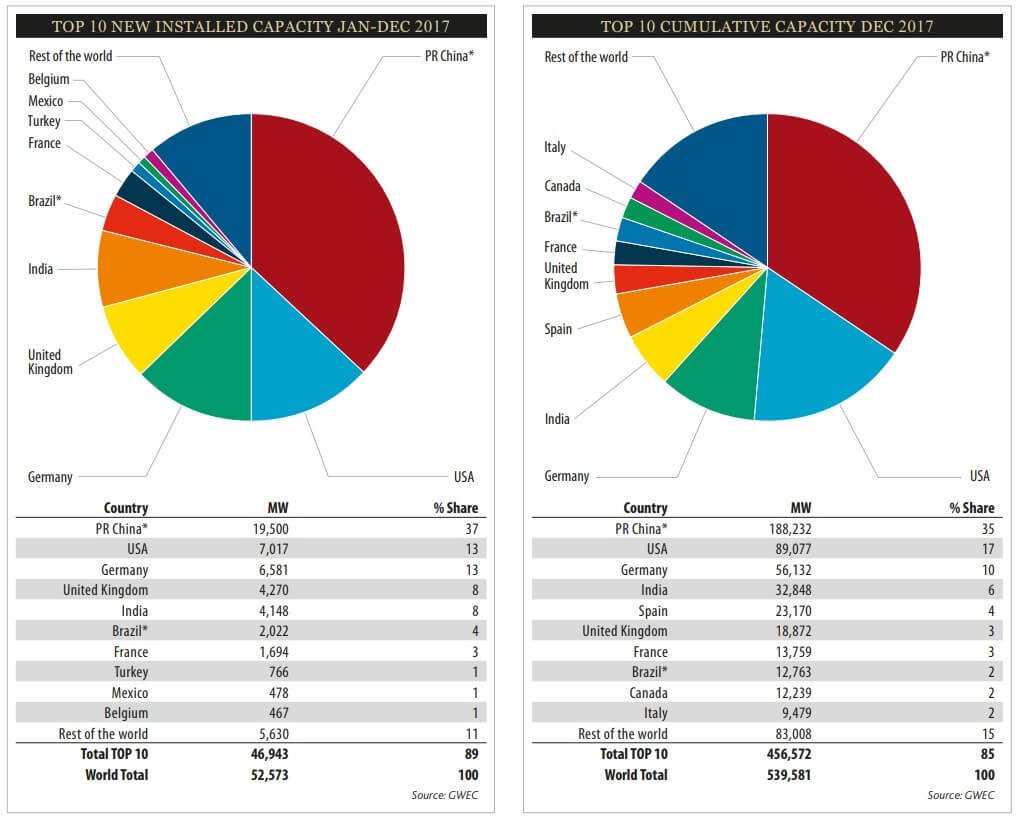 “The numbers show a maturing industry, in transition to a market-based system, competing successfully with heavily subsidized incumbent technologies”, said Steve Sawyer, GWEC Secretary General. “The transition to a fully commercial, market-based operation has left policy gaps in some countries, and the global 2017 numbers reflect that, as will installations in 2018.

“Wind is the most competitively priced technology in many if not most markets; and the emergence of wind-solar hybrids, more sophisticated grid management and increasingly affordable storage begin to paint a picture of what a fully commercial fossil-free power sector will look like.”

Cratering prices for both onshore and offshore wind continue to surprise. Markets in such diverse locations as Morocco, India, Mexico and Canada range in the area of $0.03/kWh, with a recent Mexican tender coming in with prices below $0.02. Meanwhile, offshore wind had its first ‘subsidy-free’ tender in Germany this year, with tenders for more than 1 GW of new offshore capacity receiving no more than the wholesale price of electricity. In Asia, China continues to lead. India had a strong year but will be the ‘victim’ of a policy gap in 2018. Pakistan, Thailand, and Vietnam all continue to show promise, and there are stirrings in the laggard markets in Japan, and particularly in South Korea as a result of policies being enacted by the new government.

Europe had its best year ever, led by more than 6 GW in Germany, a very strong showing in the UK, and a resurgence in the French market. Finland, Belgium, Ireland, and Croatia also set new records. Offshore installations of more than 3,000 MW are a harbinger of things to come.

The U.S. had another strong year with 7.1 GW and a strong pipeline for the next few years. Direct corporate purchase of renewables plays an increasing role in that market, as the litany of household brand names (Google, Apple, Nike, Facebook, Wal-Mart, Microsoft, and others) signing wind and solar PPAs continues to grow. Canada and Mexico both had modest years in terms of installations, but a new government in Alberta is breathing life into the Canadian market and the solid policy foundation in Mexico will make it a substantial growth market for the coming decade.

In Latin America, Brazil chalked up more than 2 GW, despite political and economic crises which are not yet fully resolved. Uruguay completed its build-out and is nearing the 100% renewable energy target in the power sector. The results of 2016 and 2017’s auctions in Argentina will start to result in strong installation numbers in 2018 and beyond.

There was a lot of activity in Africa and the Middle East, but the only completed projects were in South Africa, where 621 MW of new capacity was added to the grid. Big projects in Kenya and Morocco are awaiting grid connection this year.

The Pacific region remains quiet, and although a lot of new contracts were signed in 2017. Australia, the only active market in the region, put up a modest 245 MW.

“The dramatic price drops for wind technology has put a big squeeze on the profits up and down the whole supply chain”, concluded Sawyer. “But we’re fulfilling our promise to provide the largest quantity of carbon-free electricity at the lowest price. Smaller profit margins are a small price to pay for leading the energy revolution.”

Filed Under: Uncategorized
Tagged With: GWEC