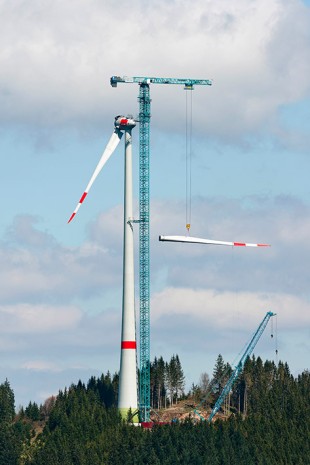 The Liebherr 1000 EC-B 125 Litronic tower crane erects an ENERCON wind turbine. With a hub height of 149 m and a blade diameter of 115 m, it is the largest turbine ever to be erected using this crane.

ENERCON’s Liebherr 1000 EC-B 125 Litronic tower crane erected a new wind turbine in the Prechtaler Schanze Wind Farm in April 2016. With a hub height of 149 meters and a blade diameter of 115 m, it is the largest turbine ever to be erected using this crane.

With its 31.50 m jib and a hook height of 164 m, the crane was still able to hoist 100 tons using four lines – one of the main features of the most powerful Flat-Top crane built by Liebherr, which has been enhanced for erecting wind turbines.

Transport & erection at remote sites
Wind turbines in areas with poor wind conditions are not generally used in large wind farms, and instead are erected in wooded areas or locations with difficult access. Both these criteria were applied to this site in the southern Black Forest.

According to ENERCON, only the 1000 EC-B 125 Litronic could be considered for the small, steep hilltop in Gutach, Mühlenbach in the middle of the forest. The area required for erecting a complete Flat-Top crane is approximately half of the normal standing area of other crane systems. The jib used in this case was very short, which is why no additional site clearance work was required for its assembly.

In addition the logistics required to transport the 1000 EC-B 125 Litronic are much less than for comparable crane systems since the various components of the tower crane are supplied in small packages. The jib components of the large crane can be inserted into the tower elements, transported on a truck, and assembled on site.

Reaching record heights
During the process, first of all the compact Liebherr LR 1200 crawler crane assembled the Flat-Top crane to its initial hook height of 39 m. From this point, the tower crane erected the wind turbine and was able to climb up the turbine tower as it rose using its own climbing equipment. One benefit of tower cranes is their operational safety in wind speeds of up to 65 km/h. The Liebherr Flat-Top crane also has a very small footprint.

They were only possible because Liebherr’s flagship Flat-Top crane was assembled on the 1000 HC tower system. The monoblock tower sections with system dimensions of 3.40 x 3.40 m and a length of 5.80 m allow high free-standing erection heights with short erection times. The erection of the turbine took around four weeks.

In addition the crane was fitted with an adjustable undercarriage with a support base measuring 18.0 x 18.0 m at the request of ENERCON for the erection of the first turbine. The support arms can be adjusted on this special undercarriage from the 45° position by +/- 5° or +/- 10°. The footprint of the support base is then 20.4 x 15.2 m. This means that the crane can be moved closer to the object since it requires so little space.

Specialist for turbine erection
The locations chosen for wind turbines generally have harsh wind conditions which can adversely affect cranes. One specific benefit of tower cranes is their operational safety in wind speeds of up to 65 km/h.

The crane driver has a perfect view of what is going on from the cabin. This makes it easier to position the rotor blades precisely and safely using the trolley jib.