Falling costs and technological improvements are driving a boom in offshore wind power projects worldwide. And while Europe’s industry is still the most mature, the U.S.’ is learning and growing. 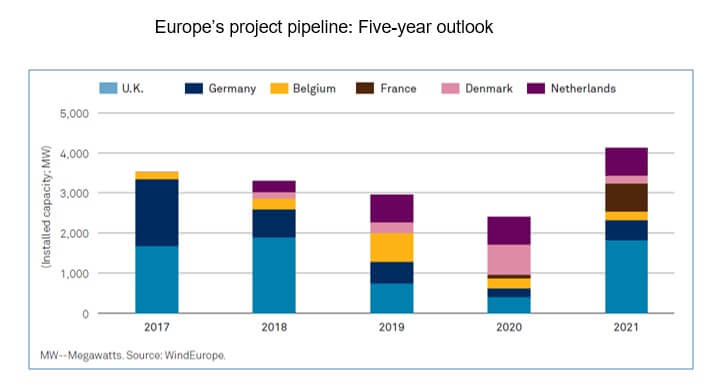 Wind-farm construction is expected to slow through 2020 and then pick up in 2021.

Yet, while progress is clear, the industry still faces significant challenges; the need for larger vessels, a limited number of counterparties with the necessary expertise, complex and long design processes, and a lack of industry standardization.

However, if technology continues to improve at the current rate, production costs could remain low, or decline further – and if this can trend be replicated in the nascent U.S. industry – the future for the emergent offshore industry will be bright.

In 2016, operators connected 1.6 GW of new offshore wind power capacity to the grid in Europe, representing 70% of global installed capacity that year. In 2015, capacity had been even higher – at about 2.4 GW – making for an exceptional year following the resolution of the grid-connection delays in Germany.Over the medium term, the North Sea is likely to stay the main region for deployment (accounting for 78% of the European total, followed by the Baltic Sea (accounting for 14.1%). Based on the number of offshore wind projects in construction, WindEurope estimates total European offshore wind capacity will be 24.6 GW by 2020.

Europe’s continued low-interest rates and narrowing investment returns look set to create an environment for lower power bids. Indeed, Bloomberg New Energy Finance (BNEF) estimates bids will be in a record-low range of $65 to $82 (€61 to €77) per MWh in the Baltic Sea and $58/MWh to $77/MWh (€55/MWh to €73/MWh) in the North Sea.

This follows the record-low bid of $56/MWh (€49.9/MWh) for North Sea capacity last year by Vattenfall AB for a project off the Danish coast. These falling costs have influenced overall investment in the offshore wind industry in Europe, which has grown at an annual average rate of 30% in the past five years.

In Europe – and around the world – technological developments have contributed most to cutting costs and the subsequent boom of offshore wind projects. Although final price reductions resulting from financial optimization have also played a part.

The technologies that have incited the most progress are larger, more effective turbines and improved foundations. And, given that wind turbine generators (WTGs) account for most capital and operating expenses, rotor sizes will likely continue to increase in the pursuit of economies of scale. In turn, this will reduce the cost per MW, improving yield and operations and maintenance (O&M) efficiencies.

Moreover, increasing the availability of purpose-built, offshore-wind vessels, greater involvement of oil and gas majors, and a range of specialized vessels for specific operations (such as WTGs, foundations, and cables) are set to lower costs further.

Despite significant progress in recent years, the industry still faces many challenges, which could affect the credit quality of projects if the risks are not sufficiently managed. For example, current technology requires larger vessels during the construction phase, which only a limited number of players are equipped to handle.

Furthermore, it has been the case that grid connections lag behind the rate of new projects coming online, which sometimes limits the construction program, owing to time discrepancies between planning and building wind turbines and transmission lines.

In the new, emerging North American market, these limitations will be acutely felt alongside geographical restrictions and the effects of some regulatory policy. However, while offshore wind development in North America has long lagged behind Europe, it is now beginning to emerge amid changing circumstances. Indeed the potential for offshore wind power capacity is huge in the U.S. Proposed developments are concentrated in the northeast and Mid-Atlantic regions, which are densely populated metropolitan areas with strong energy demand, high electricity prices, and shallow continental shelves which lend themselves to offshore wind farm construction, as well as generally favorable regulatory initiatives.

Developers have so far secured 11 commercial leases from the Bureau of Ocean Energy Management (BOEM), which oversees federal waters, to build over 14 GW of offshore wind off the coasts of Rhode Island, Massachusetts, Virginia, Maryland, New Jersey, Delaware, and New York.

In March 2017, North Carolina was added to that list via a BOEM lease sale, with the next such sale slated for 2018. Projects are also being considered for the Great Lakes, the Gulf of Mexico, and on the Pacific Coast. But it should be noted that only one has advanced beyond early planning stages.

In Canada, the offshore wind industry is even less developed than in the U.S. The first ever project, the 180MW St. George’s Bay project, is still in the early planning stage, for example. However, the industry may benefit from actions by the Canadian government, which is in the process of developing new rules for approving and monitoring new offshore projects alongside a new single regulatory oversight board.

Ultimately, the costs for offshore development have continued to fall as technology has advanced, fuelling projects to expand offshore wind capacity, a trend which is hoped to continue.

The maturation of the industry, particularly in Europe, has enabled greater transparency and a better understanding of the key risks. And, with vast untapped offshore wind potential around the globe, it is hoped that other regions will follow in Europe’s footsteps.