As the wind industry has matured, turbines have grown larger and the cost of wind energy has been driven down. Further growth today, however, is not possible due to transport constraints for the tower. Today’s tower designers are forced to choose between: 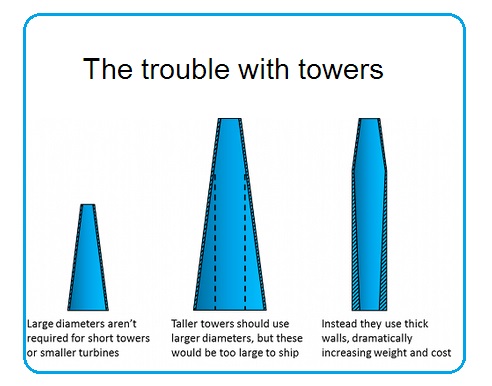 The trouble with tall towers says Keystone is that shipping compromises their shape, and they use too much steel.

Keystone Tower Systems brings spiral welding to the wind industry through an innovation that enables production of tapered tubes with variable wall thickness.

The process uses the same welders and steel used in today’s tower manufacturing, but with 1/10th of the labor, enabling efficient on-site operation, and towers of any size. Keystone’s process requires no in-plane deformation of the steel, and its trapezoidal sheets can be cut without producing scrap.

Keystone has adapted spiral welding, a proven in-field manufacturing process from the pipe industry, to the production of large diameter, wind-turbine towers. Spiral welding allows producing towers on-site, eliminating the need for transport and enabling low-cost towers of 140m hub-height and beyond.

Spiral welding allows producing towers on-site, eliminating the need for transport and enabling low-cost towers of 140m hub-height and beyond.

Keystone recently completed a partial scale prototype of the manufacturing system, and will be installing the first demonstration tower with turbine later this year. We are currently working with some of the biggest turbine manufacturers and wind developers in the world to incorporate these towers into their plans, and are scaling up to implement a commercial system to produce towers 140m and taller.

Keystone currently has offices in Somerville, Massachusetts, and will be opening a location in the Denver, Colorado area in mid-2014 to support construction of the first commercial-scale tapered spiral welder.