Tradepoint Atlantic has several key assets that qualify it as the best location for the emerging offshore wind industry in the U.S. The Sparrows Point facility has a 1,200 foot long deep-water pier, a 2,200 foot deep-water marine berth and 3,100 acres of available land dedicated for manufacturing development.

According to US Wind, TPA is uniquely positioned to become the hub of offshore wind industrial activity for the entire East Coast of the United States for generations to come. US Wind plans to build a 750-MW site, which would be the first large, utility-scale offshore wind site in the nation.

“US Wind chose to invest in Maryland because it has everything we need to become the central hub of offshore wind on the East Coast – optimal location, deep water, available land and access to a world-class workforce,” said Paul Rich, Director of Project Development. “We want to be in Maryland and we want to drive economic activity in Maryland.”

At Wednesday’s meeting, US Wind leaders briefed various Maryland State and Baltimore County agency officials about the significant interest expressed by the industry in the TPA facility, the timeline of development and the importance of US Wind receiving their OREC approval, which the Public Service Commission (PSC) will begin reviewing at the end of November. 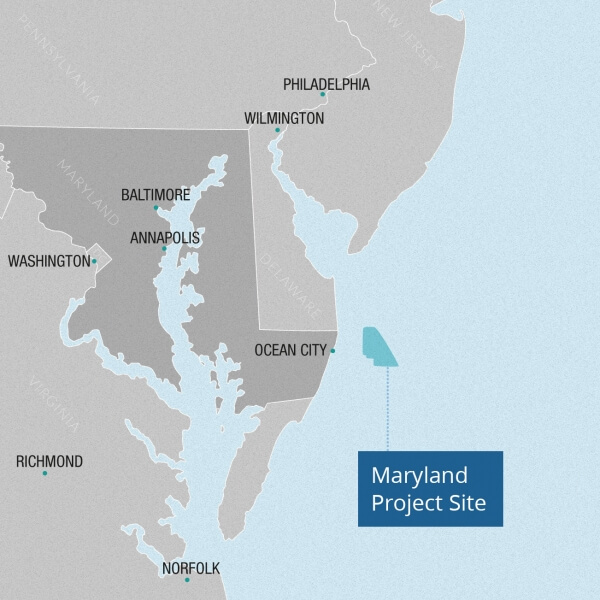 The TPA facility would service the manufacturing needs of its Maryland and New Jersey sites, which would combine for more than 2,200 MW of renewable energy generation.

Tradepoint Atlantic has several key assets that qualify it as the best location for the emerging offshore wind industry in the U.S. Its facility has a 1,200 foot long deep-water pier, a 2,200 foot deep-water marine berth and 3,100 acres of available land dedicated for manufacturing development. The TPA port is managed by Host Terminals and its subsidiary, Bay Marine Services.

“Tradepoint Atlantic sees great potential in the offshore wind industry and the opportunity to work with US Wind”, said Joe Greco, TPA’s Vice President of Commercial/Trade Development. “The manufacturing aspects of this opportunity are incredibly attractive and our property is proven to support them. Add the logistical benefits we provide in areas of rail, highway access, marine, and it becomes very compelling how Baltimore and Tradepoint Atlantic can support coast-wide wind projects and bring manufacturing jobs back to Sparrows Point.”

Maryland-based US Wind is the leader of offshore wind in the US, with plans to use the TPA facility to service the manufacturing needs of its Maryland and New Jersey sites, which would combine for more than 2,200 MW of renewable energy generation. US Wind is poised to begin the OREC proceeding with the Maryland PSC at the end of November 2016. The PSC is anticipated to make its decision by the end of May 2017.

US Wind officials say that without approval from the PSC, other competing ports on the east coast of the US vying for this opportunity will seize the chance to capture a multi-billion dollar manufacturing industry, leaving Maryland behind. Ports competing for this industry include Paulsboro, New Jersey and New Bedford, Massachusetts.

Filed Under: Offshore wind
Tagged With: Tradepoint Atlantic, US Wind