Once upon a time, Cleveland was the 5th largest city in the U.S. and ranked 1st in transportation equipment; 2nd in machinery; 3rd in iron-and-steel making; 4th in metal products; and 5th in electrical machinery. Not surprisingly, an entrepreneur named John D. Rockefeller made his fortune here and became the richest man in history. Our present day world leaders, The Cleveland Museum of Art, The Cleveland Orchestra, The Cleveland Clinic, and The Cleveland Foundation share a 100+ year heritage with those great innovators, visionaries, and titans of industry.

Today, we see a city that is becoming one of the most livable cities in America as well as developing sustainable practices that attract young and old residents alike. In fact, in 2016, Forbes magazine named Cleveland the “Hottest City in America.” However, Cleveland is now 51st in population among U.S. cities, and many of the industries from the glory days are shadows of themselves, have closed, or moved away. So, how does the Hottest City in America attract the best and brightest millennials as well as leverage its legacy of industrialization, entrepreneurship, and innovation to generate jobs of the future? 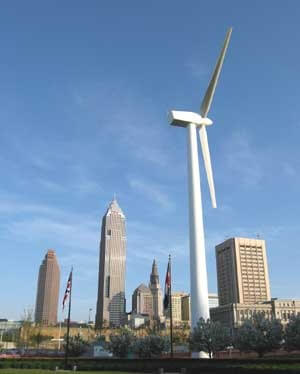 Part of the answer lies in health care and medical technology, while another finds it roots in information technologies. However, neither of these industries are likely to leverage our strong manufacturing or industrialization capabilities. No matter how one looks at Cleveland and the surrounding region, we know how to make things better than almost anyone in the world, and that is where we can make the most of our future.

One way to tap this inherent strength is through the abundant wind resource right off our shores of Lake Erie. Not only can this resource supply an inexhaustible source of clean energy, the fundamental nature of this industry depends on engineering, manufacturing, fabrication, and maritime activities. Lake Erie Energy Development Corp. (LEEDCo) has taken the lead to bring this industry home and make Cleveland a national center. Project Icebreaker, a demonstration project consisting of 6 Vestas 3.45 MW turbines 8-10 miles offshore of the Port of Cleveland, is poised for construction in 2019.

Icebreaker will generate 500 jobs during construction and add $168 million to the local economy. More importantly, every business and worker on the project will gain valuable experience that will allow them to work anywhere in the U.S. on offshore projects as this industry grows.

Anchoring these giant turbines to the lakebed is the Mono Bucket, which consists of an 18-meter suction bucket with a 4.5-meter shaft emerging from the lid. This innovative technology eliminates the typical pile driving associated with offshore foundations through of a simple suction technique that embeds it into the soil. More to the point, this 600-ton structure will be manufactured in the region with two Ohio companies in the running.

This “Cleveland Blue Sky” is already a reality in Europe; home to $16 billion per year in offshore wind investment and 95,000 jobs. Closer to our shores, tiny Rhode Island built the first U.S. project in November 2016 and an almost irrational exuberance exists all along the East Coast. Dozens of European Fortune 200 companies are clamoring for access into these yet undeveloped markets.  Talk of jobs and manufacturing are a daily occurrence and states are requiring developers to invest in “manufacturing” facilities. The real message here is that offshore wind has now come to the United States and it is up to Cleveland to take this opportunity while it exists.

To bring this vision to reality, LEEDCo has mobilized a world-class team of experts with decades of experience in offshore wind, freshwater ice, aquatics, avian and bat, water quality, project finance, engineering, fabrication, and permitting. Icebreaker, as the demonstration project is called, was designed from the beginning to be small enough to have no significant impact on the environment and large enough to gain valuable technical insight. Over the first 5 years of operation, this “science lab” will collect data related to water quality, aquatic species, birds, bats, ice, wind resource, engineering, and manufacturing. During its 25-year projected lifetime, Icebreaker will provide data from out in the lake that will benefit all stakeholders and lead to sustained economic growth into the future.

Dr. Lorry Wagner, an experienced energy engineer, has served as president of the Cleveland-based Lake Erie Energy Development Corporation (LEEDCo) since May of 2010. Previous energy project experience includes nuclear, hydroelectric, solar, as well as wind. He received his degrees from Purdue University where he developed several new heat transfer technologies for fusion reactors.