Many small indiscernible details go into a wind turbine bearing, such as this one, because of the variable and transient loads it must shoulder.

The Timken Company recently took the wraps off a new $14-million test and training facility that will be a part of the Stark State College campus in North Canton, Ohio. Although local luminaries were in attendance, the big star of the unveiling, held at the new Stark State College and Timken Technology and Test Center, is a rig for testing large, main-shaft bearings destined for wind turbines with up to five-megawatt output. Testing capabilities within the 18,000-ft2 facility also have the flexibility to focus on other large, rotating equipment for industries including off-shore oil rigs, mine trucks, and hydraulic roll presses.

The machine, capable of handling bearings with up to 4-m OD, can subject them to loads with up to five degrees of freedom: torsional, yaw loads, thrust loads, bending moments, and their combination. More significantly, the test rig has capability to vary loads just as the wind does, at up to 2 Hz.

“During the development project of a wind turbine, we exchange data with clients to determine bearing life through sophisticated analytical tools. This field data is a comprehensive set of data points derived from five load axes put on the bearing system during operation,” says Brad Baldwin, Timken General Manager–Wind Energy. “Matching our analytical tools with physical test data is a benefit of the new test center.”

Generally, the test rig is designed to generate near 1,000,000-lb thrust, near 750,000-lb radial or side loads, and over 5,000,000 ft-lb moment loads. “Those maxima represent what a 5-MW turbine might experience, and can be scaled down to simulate smaller turbines,” says Greg 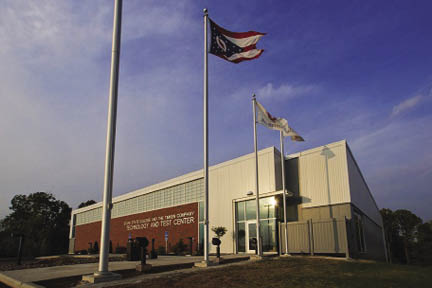 The test center also houses a classroom and lab for training Stark State students in electrical and mechanical engineering as well as alternative energy programs. The collaboration of Timken and Stark State College with the State of Ohio led to the construction of the testing facility, which is the first of its kind in the Americas. In addition to the tech center, Stark State College announced the beginning of a one-year wind technician program. It already has 12 students enrolled.

Martin, Timken Development Specialist and Project Lead. “With our growing installed base and number of new development projects, it’s important to have full-scale test capability.”

The machine also allows conducting High Accelerated Life Tests or HALT tests. After applying actual loads, the machine can spin a test bearing at 30 rpm and 24 hours per day instead of the 15 to 20 rpm of a working wind turbine at a 35% capacity factor. The result is a five to six month completed HALT test with easily accessible test data versus a conventional field test of three years which is expensive and lengthy.

The bearing in the new test rig is for a 3 MW direct-drive turbine. The company has been testing bearings on smaller machines since 1925.

The lab’s several advantages include reducing development cost and time, and minimizing liability. “What you can’t see on the inside of this test bearing,” Baldwin says motioning to the large bearing in the test rig, “are unique manufacturing processes such as surface finishes and profiles, cage development, and advances in materials that provide industry-leading performance while also maintaining cost targets. The test rig is also significant because it provides the ability to test related components such as seals, lubrication, lube applicators, and condition monitoring that are integral to the total system life information. “The bearing system is right at the heart of a wind turbine,” says Timken CTO Doug Smith. “For many turbines, our taper roller bearing supports the entire nose cone of the turbine. All the loads: pitch, yaw, overturning moment and even transient loads have to be accounted for in our bearing design and test criteria. With the new test center, we feel even more confident we can serve our growing wind customers.” WPE