You may have seen this photo online recently of EDF’s floating offshore vertical-axis wind turbine (VAWT) called “Vertiwind.” It has a nameplate capacity of two megawatts. The Vertiwind will be part of EDF-EN’s offshore wind farm project called Inflow, which the European Commission is helping fund.

The strange design piqued my curiosity about VAWTs. Why would a developer opt for a VAWT over a horizontal-axis wind turbine (HAWT)? And, are there good reasons for more developers to consider VAWT models? 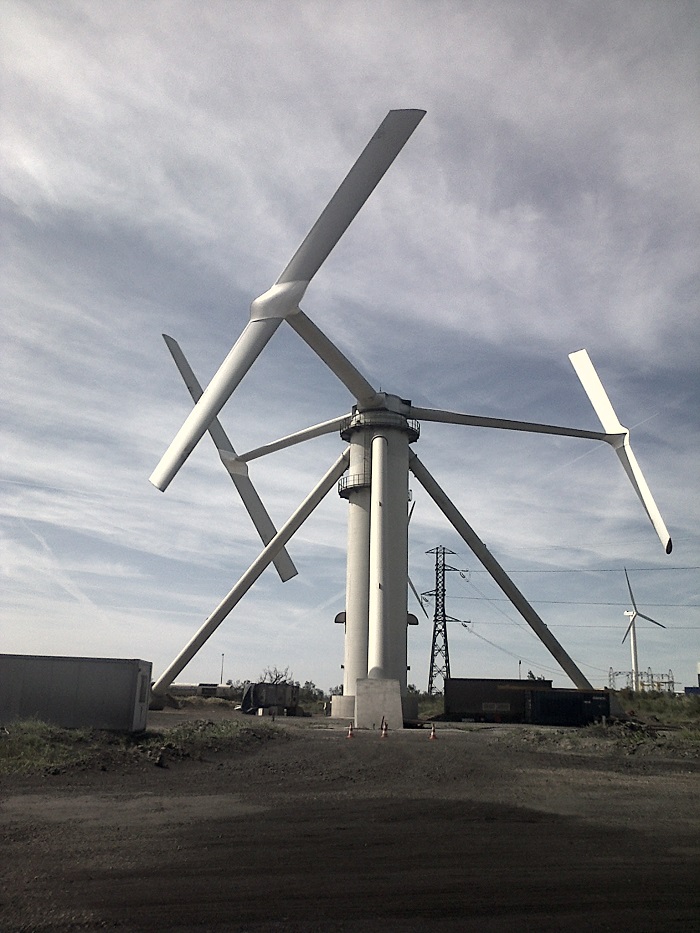 Let’s look at how a VAWT works and how it stacks up against the horizontal-axis wind turbine. There are three basic advantages of a VAWT over HAWT and just as many drawbacks. For instance:

Fewer components – Obviously, the main rotor shaft of a VAWT is oriented vertically rather than horizontally. The advantage here comes as a reduction in parts. A conventional HAWT must first be generally oriented into the wind before the blades can rotate. In contrast, the blades of a VAWT catch wind in any direction without directional orientation.  This makes it ideal for gusty conditions. What’s more, there is no need for components to control yaw and pitch.

Safety – Keeping workers from climbing tall turbine towers also makes VAWTs a safer alternative. Maintenance costs are further reduced because gearboxes, generators, and most electrical and mechanical components are at or near ground level, avoiding the need for climbing gear, lifts, and danger-pay compensation.

Scaling down – the design has potential to scale down and remain fairly efficient in dense urban areas or on rooftops where other renewable technologies might not be feasible. The residential possibilities of the VAWT model seem promising in reducing energy consumption from hydrocarbon sources.

Despite the plusses, there are good reasons that many are skeptical of VAWTs’ potential to ever be adopted on a wind farm. For instance:

Efficiency – When the wind blows on the blades of a HAWT, all of them contribute to energy production. When wind blows on a vertical-axis turbine, only a fraction of the blades generate torque while the other parts merely ‘go along for the ride’. The result is comparably reduced efficiency in power generation.

Simply put, because power generation efficiency isn’t as good, VAWTs aren’t as good long-term investments. This is ultimately why wind-energy developers have stuck with the HAWT. An owner’s greatest concern is simply generating as much power as possible over 20 plus years. Until recently, no prototype VAWT was close to the long-term generating capacity of horizontal-axis designs.  Conventional VAWTs have no such optimization control, not yet, at least.

Scaling up – There are a number of obstacles in scaling VAWTs to commercial size. The first is that they aren’t as sturdy, by design, as a HAWT. This is because of where a HAWT carries most of its stress compared to widely-used VAWT models.

A large VAWT must be secured with many long guy-wires, especially those of the so-called “egg beater” design (link here). Conventional wisdom says that a VAWT wind farm of commercial scale would require more materials and space to generate a comparable amount of power as a farm equipped with horizontal-axis turbines. It’s not that VAWTs can’t be scaled to commercial purposes, they can, but the number of distinct challenges in doing so come without advantages in terms of cost or efficiency. An Archimedes turbine may be the compromise between VAWT and HAWT.

More maintenance – While a VAWT has fewer components that can wear and require repair, the forces acting on the machine are more turbulent than those on a HAWT. When a HAWT is pointed in the right direction, the blades are also pitched optimally. This is why pitch and yaw controls are worth their maintenance costs they incur compared to not having these controls at all.

In addition, smaller VAWTs that one might find on top of a city structure such as a stadium or apartment building, experience what some call jostling forces. These generate lateral stress that can only be accounted for with more and sturdier materials, and by ensuring regular maintenance.

VAWTS are still a popular design among enthusiasts and amateur engineers because they pose a number of fascinating challenges and have potential uses when the challenges are met. They remain popular for small-scale and residential installations where tight spaces limit the kind of renewables that can be installed. However, this might change in the near future with the recently announced Archimedes design (link), which is closer to a HAWT. What’s more, due to its small size, it shares some of the benefits of both the HAWT and VAWT models.

What about offshore VAWTs? One argument to discourage development of offshore VAWTs is the (assumed) limitations to size and the proven and significant generating capacity of offshore HAWTs. It is generally held that there must be a limit to how big developers can go with a conventional HAWT design and OEMs may be approaching the limit. So why not VAWTs?

It’s difficult to argue that the potential benefits of a VAWT design are worth the development resources. In the current market, investors and developers have reason to be skeptical of offshore VAWTs. But give credit to EDF-EN for attempting to do things differently and for not shying away from the engineering challenges mentioned here.  Still, I am as yet unconvinced of the necessity of such a project let alone its cost-effectiveness compared to the established horizontal-axis design.