Development of the Wake Imaging System is underway at Sandia applying the Planar Doppler Velocimetry (PDV) technique over a larger area and at lower speeds than previously attempted with the goal of measuring the velocity in the wake of wind turbines at the Scaled Wind Farm Technology (SWiFT) facility. As a major step in the system development, an intermediate-scaled field test has begun at Sandia National Laboratories to further develop the system prior to deployment at SWiFT. The field test will help researchers recognize and overcome technical challenges associated with implementing PDV on such large scales. 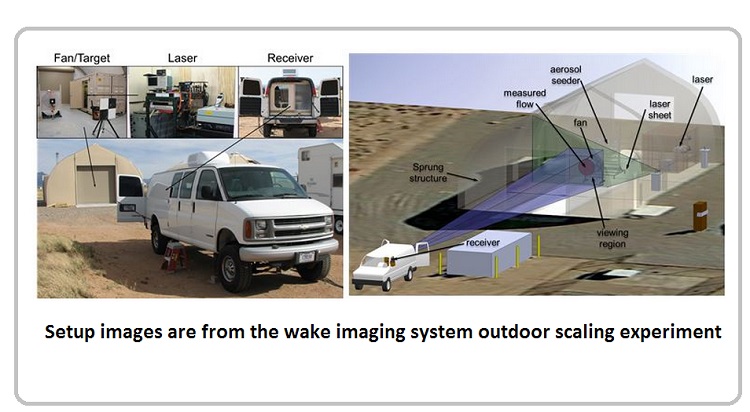 All components of the system are running together for the first time following the application of all necessary safety precautions and procedures. The image displays a flow visualization image of the particle-seeded flow through the 1 meter diameter fan with flow straighteners. A laser-light sheet illuminates the seeding over an area of approximately 4 m2. The non-uniform instantaneous flow structures can be visualized within the light sheet. The next step is to collect more PDV measurements and process the data to obtain velocity images to compare against independent anemometer data. A more detailed description of the system is here in past newsletters