Smart loads management strategies for mitigating damage in blades is being studied by Phillip Richards of the Georgia Institute of Technology as part of Sandia Lab’s Offshore Structural Health and Prognostics Management project. 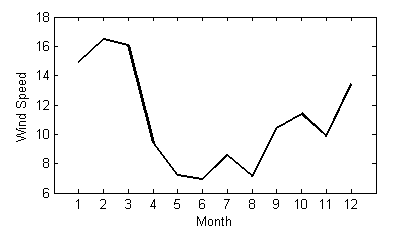 As an alternative to shutting a turbine down once blade damage is detected, a load mitigating control strategy lets the turbine continue operating with damaged blades. This could let wind farm operators better plan maintenance and increase revenue.  Some offshore sites experience a significant variation in monthly average wind speeds, leading to “windy” seasons as well as “calm” seasons. A preliminary economic analysis shows that when there is a significant variation in monthly average wind speeds at a given site, an economic advantage can be gained by operating the partially damaged turbines through the windy season under a smart loads management strategy and delaying maintenance of the turbines until the calmer season.  This would have a secondary advantage of allowing operators to better plan maintenance of multiple turbines when conditions are the safest (during the “calm” season). At the moment, two primary load mitigation or derating strategies are being considered: one limits blade bending moments (Strategy A), and another limits the power production of the turbine (Strategy B). These two are compared with the baseline operating performance for the NREL 5MW reference turbine. Although a more comprehensive summary of these results is forthcoming, the preliminary economic analysis results are presented here for a few selected conditions (or operating parameters) to illustrate some uses of the current model. For example, results indicate that when the derating level is not too low (>75%) and the downtime (to repair the turbine) is significant (> 2 weeks), it is possible to use derating to increase the revenue earned from the damaged turbine. The figure above shows the potential annual energy output of the NREL 5MW baseline turbine for one strategy (A) and one derating level (75%), and one month of downtime maintenance. The following chart sequence compares the optimal derating times as a function of damage onset month, derating strategy, derating level, and maintenance downtime. This shows that Strategy A could be used for a damaged turbine to align the maintenance downtime with calmest month for an increase in AEP, while Strategy B would be used only if secondary reasons require a delay in maintenance. In other work, Sandia engineers have been investigating the implementation of these derating strategies using the NREL 5MW turbine FAST/AeroDyn model integrated with Simulink.  Initial results have shown that simple derating is effective at reducing azimuth-averaged blade section loads, but may increase the periodic component of the blade flapping moment. This demonstrates that care must be taken in the implementation of load-mitigation strategies if fatigue damage, which is generally most sensitive to periodic loading, is to be effectively mitigated.